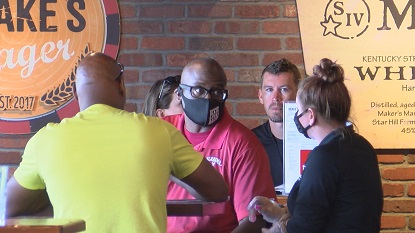 In Huntsville, local restaurants told WAAY 31 they already prepared for the new mandatory masking order and are ready to enforce it.

"We knew that it would be coming up soon," Nicole Wertz, the General manager for Drake's, said.

Wertz said she wasn't surprised when the state approved Madison County's mandatory masking order on Monday. She said when they re-opened in May, they added a a hostess position to the staff to take temperatures at the door. Now, the hostess will also make sure people come in with a mask on. Wertz said she doesn't believe enforcing the policy will be an issue.

But, she said there is still some concern that the mandatory policy could slow business down, or that they could be shut down again because of the rise in coronavirus cases.

"I think it's such an uncertain time right now that anything can happen, even reverting back to shutting down. We're prepared and understanding if that's what we have to do," Wertz said.

Wertz said she hopes the new masking order will slow down cases so they can stay open. She believes following this order is just one way people can continue to do their part to keep the economy open and people safe.

"Everyone needs to do their part and make this as safe as they possibly can," she said.

Wertz said they're also considering having masks at the hostess table on stand by for customers who may have forgotten one.

According to the order, customers won't have to wear one while they are sitting down at the table or eating or drinking. But, it will be required to enter the restaurant.