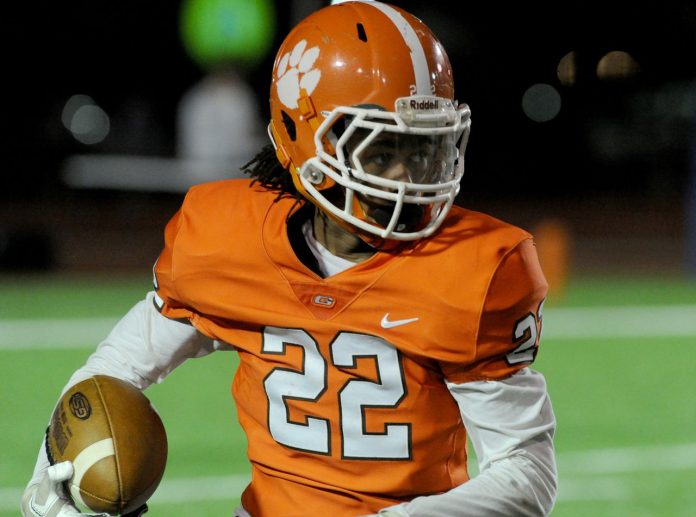 Caleb Hunt ran for two touchdowns as Grissom tuned up for the Class 7A playoffs by beating 6A Hazel Green 19-0.

The visiting Tigers (6-4) earned their first winning season since 2002. In their first playoff appearance since 2004, they’ll travel next week to unbeaten, top-ranked and defending state champion Thompson.

“I’m excited about the challenge,” Grissom’s fourth-year coach Chip English said. “This is what high school football’s about.”

After a scoreless first half, Hunt scored on a 20-yarder in the third quarter and a 13-yarder in the fourth. Jakob Foss threw a 20-yard touchdown pass to John Allen Stogner.

Hazel Green was held to 68 total yards. The Trojans finished at 3-7.

Star of the game: Hunt had 21 carries for 167 yards. This was the junior’s first time to score two touchdowns in a game.

Play of the game: Hunt burst through the middle for his 20-yarder that opened the scoring at 10:03 in the third quarter.

Key sequence: Grissom took the second half kickoff and marched 49 yards in four plays for a 6-0 lead.

Stat sheet: Foss completed 13-of-23 passes for 173 yards and one touchdown with one interception. Landon Currie made an interception for the Tigers. Hazel Green’s Ryan Gibson had 10 carries for 29 yards.

Coachspeak: “Ultimate goal was met with a win. It wasn’t our cleanest game but our guys played hard.” -- English

“So proud of our kids and the effort they gave tonight. Grissom is a 7A playoff team and we gave them all they wanted.” -- Hazel Green coach Joel Schrenk

They said it ... : “We executed our game plan. I feel like I played explosive and I stepped up.” -- Hunt

“I just think we played extremely well. We played as a team. Our defense has played well all year. And our offense wasn’t clicking as we thought but good teams find a way to win at the end of the day.” -- Stogner.

“Our first drive we started out slow. We came out and locked it up in the secondary and got all our reads right.” -- Currie.

What’s next? Grissom goes to Alabaster to face Thompson (10-0) in the first meeting between the programs. Hazel Green is finished for the year.

Aiden Cox threw for three touchdowns and rushed for one to lead host Arab to a 27-8 win over Boaz.

Cox completed 11 of 13 passes for 165 yards. His TD run came on a 1-yard sneak. Matthew Turnage rushed for 164 yards and caught a 28-yard touchdown pass. Dakota NeSmith caught TD passes of 15 and 20 yards.

Bennefield led Boaz with 83 yards rushing and a 5-yard touchdown.

Both teams closed the regular season at 5-5. Boaz travels to Leeds next week to open the Class 5A playoffs while Arab goes to Pinson Valley in 6A.

New Hope finished its season with a dominating 35-0 win over visiting R.A. Hubbard.

The Indians led 28-0 at the half behind two touchdowns from Charlie Furlough, one from Duvine Beebe and one from quarterback Dylan Selvage.

Class 4A New Hope finished 5-5 for the second consecutive season, marking the first time that the Indians have finished at least .500 in back-to-back years since 2012-13.

Class 1A R.A. Hubbard (5-5) opens the playoffs next week at Ragland.

Senior running back Jerry Burton rushed for 266 yards and three touchdowns to lead Priceville to a 35-29 overtime win over St. John Paul II.

Burton had 200 yards and all three of his scores in the first half. His third touchdown put him past the 5,000-yard rushing mark in his career.

“Whenever I heard that I cried a little bit,” Burton said. “It got me a little emotional. I was thinking about the little kid Jerry that was talking about being a football star, whether it was high school, college or whatever. It’s just been an accomplishment for me to be successful in football in general.”

Wyatt Hurt had a touchdown pass to Xander Gaines, who also ran for the winning score in overtime. J.J. Vallejo kicked a 35-yard field goal. Tyler Cappi picked off a Falcons pass to end the game.

“We came out firing on offense,” Priceville coach Chris Foster said. “We kind of shot ourselves in the foot that first half. The second half it took us a little bit to find some footing but I was proud of the seniors. It was a good night for them.”

Angelo Hunter led the Falcons with 168 yards and a touchdown on the ground. Luke Mayo threw two touchdown passes. Brennan Davis and Matthew Jaworski each had a scoring catch. Jaworski also ran for a touchdown. Steven Taylor kicked a 34-yard field goal.

“It was a rough start to tonight, no question about it,” Falcons coach Robert Everett said. “I think that kind of shows the resilience of this team. It’s kind of the way our season’s gone. We’ve had some adversity we’ve had to overcome. Unfortunately, the record (1-9) doesn’t show it but the players do and see their improvement. We’re really proud of them.”