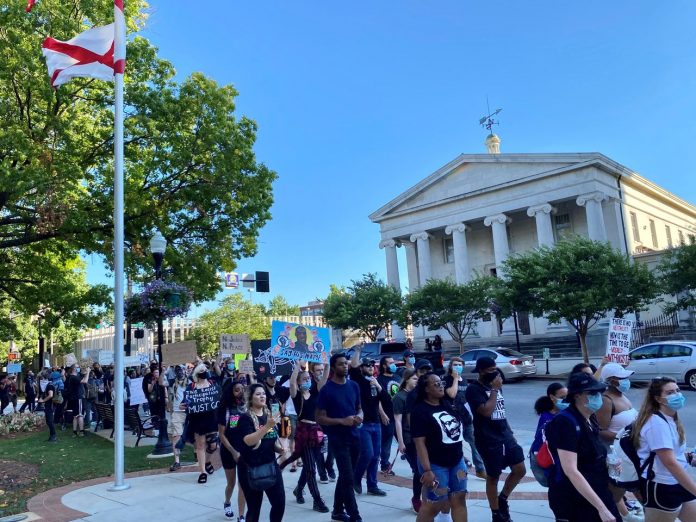 By Remus Bowden, a software engineer from Huntsville

I thought we were one of America’s most educated and progressive-ish cities in Alabama. But something funny happened as the temperature of the nation and its outcry for civil justice and equality increased to an uncomfortable level. It seems like we have been forced to do some comprehensive soul searching of our own.

Wait, aren’t we that diversity inclusive city in the Tennessee Valley, known for our southern charm, high-paying tech jobs, space program, trendy coffee shops, farmers markets, tricked out renovated middle schools and craft breweries? I mean we have a Kombucha Taproom, and nothing screams we’re headed in the direction of diversity and inclusion like freshly tapped Kombucha.

Well, that is who I thought we were. But now we find ourselves on the wrong side of history yet again when faced with fundamental principles of what is right and what is wrong. So how then do we proudly and publicly declare equality, diversity and inclusion when we shake our heads and wrinkle our noses at the idea of removing a statue?

A statue that is more than a painful reminder to everyone who passes our courthouse which is supposed to disseminate justice equally every, single, day, especially Black people. It is a reminder that our city would much rather pay homage to the fallen enemy soldiers of the Confederate past than to honor and respect the feelings of hurt, pain, and trauma of their citizens in the present. Not just any statue, but one that glorifies the Huntsville that once was with open support of the Confederate cause which reads, “In memory of the heroes who fell in defence of the principles which gave birth to the Confederate cause”.

Yes, the same Confederate heritage that lost the battle against the Union to keep people from which my heritage is rooted enslaved. Yes, the very same Confederate heritage who decided that after losing the war, it would be a great idea to create a vigilante domestic terrorist organization known as the KKK right up the road in Pulaski Tennessee. The group that would be responsible for countless acts of terrorism against innocent Black people that made it impossible for a Black person like myself to live, let alone thrive in the south.

So, my question this evening is Huntsville...who the hell are we?

Since the death of George Floyd, 22 cities have removed or approved removal of statues of Confederate leaders and segregationists. They include... Norfolk, Virginia; Jacksonville, Florida; Raleigh, North Carolina; Louisville and Frankfort, Kentucky, Decatur, Georgia; Indianapolis and Wilmington, Delaware.

Right here in Alabama... Mobile removed a statute of Confederate Admiral; Birmingham will remove a Confederate Memorial in Linn Park.

The University of Alabama removed three plaques and is reviewing the names of all buildings named for defenders of slavery or advocates of segregation.

So, let's call it what it is. It's not a statue honoring a dead general.... or a local farmer who died in the war.

What stands in Huntsville's town square is an overt, declared monument to white supremacy.

And if anything is certain in America in 2020 it is that day has passed. There is simply no plausible explanation... no justification... no excuse... no reason that any city or group of citizens can defend the existence of a memorial to the institutionalized oppression and subjugation of other human beings.

Would any of you advocate for human trafficking today. Would any of you be ok with the subjugation and enslavement of a population of people in Africa or Asia today? Of course not. It is unthinkable. It's unconscionable. It violates everything we believe and stand for. Why then, would we choose to honor those same violations of human rights and human decency... simply because they are part of our past.

The choice here is to erase that stain. Not erase the history. Place it in its proper historical context... which is not a point of pride... it is not to be perpetuated, and it's certainly not a piece of history that belongs in a place of honor... as cities across America are realizing, and taking action.

Unless we are asking for too much?

Our citizens deserve better and need to know that this city cares about them and their rights no matter what event they choose to participate in. Even if the event is to assemble peacefully a few days of the week downtown and march around at the courthouse square to express their emotional outrage for change in a system of policing that was responsible for the execution of George Floyd.

Our citizens, young and old, should not be added to the list of countless victims around the country who share battle scars and stories of being shot with non-lethal rounds and tear gas used by our own policing agencies to disperse and drive them away. No, but that is exactly what they had to endure right here in our very own downtown square.

Is that who we are as a city Huntsville? Would we rather damper if not silence the voices of our citizens that are passionate and relentless in their pursuit for justice and demand for change? Why did we then task our officers with the job of using crowd control measures on a peaceful group of their very own neighbors, who they potentially know, love and care for?

We not only missed our moment to be the change, but we double downed on a losing hand by responding to a second night of peaceful assembly and protestors on June 3rd with more of the same unnecessary aggressive crowd control tactics from the first night on June 1st. All of this because they overstayed their welcome and police felt it was time for them to go home?

This was an opportunity for a teaching moment of civility that we egregiously failed to take the lead on. Huntsville could have shown the world how to peacefully end a peaceful protest. It was also an opportunity for the community and police to have meaningful engagement. That is necessary for building trust and support between our officers and the community at large, which we so desperately need right now in our city. We must do better.

So again, who the hell are we Huntsville?

Because although we still have new businesses and trendy shops that we like to point to as symbols of progress and change, sentiments and feelings from the history that once was are seemingly unchanged.