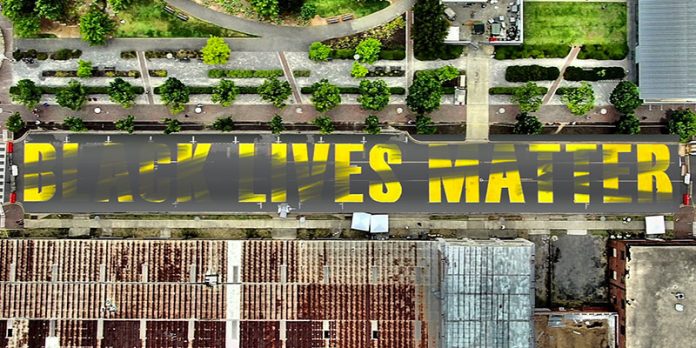 
Cities around the country have acquiesced to mobs that want to spread the message of “Black Lives Matter.” In addition to peaceful protests, we have also seen marches, encampments and even riots.

Additionally, some cities have decided to allow the local community activists to have access to public streets to put murals on the road declaring that “Black Lives Matter.”

While black lives clearly do matter, the political sloganeering and the local officials who allow it open the door to others who would like to get their political messaging out to the masses and not doubt would appreciate the tacit endorsement of the local government that their message is valid.

In fact, a former Alabama state senator was arrested this week for trying to put “Good Trouble” and “Expand Medicaid” outside of the Alabama State House.

Clearly, this is a development that could, and should, lead to an arms race that sees groups seek places to put their message.

If “Black Lives Matter” is given the space, why not “Taxed Enough Already,” “Back the Blue” or even offensive messages like “White Power?”

The law is pretty clear here, which is why you see Ku Klux Klan rallies in public places. The cities cannot pick and choose what messages it allows. It either shuts this stuff down or everything is fair game.

In Huntsville, there were competing fundraisers for murals for “Black Lives Matter” and “Back The Blue.” (FULL DISCLOSURE: I started the second one and raised over $2,500)

Huntsville Mayor Tommy Battle doesn’t want any part of this.

He said Thursday on Huntsville WVNN’s “The Dale Jackson show, “[W]hen you open that Pandora’s Box, there’s no telling what’s going to end up on the streets.”

Battle also acknowledged once it starts, it never stops.

“[I]f you let one go, then you have a second or third or fourth, and then you get into freedom of speech rights and everything else,” he added.

I was obviously glad to hear this. The point of my fundraiser was to kill all of this before it got out of hand in the city in which I live.

The goal was clear, as I wrote:

I am a taxpayer in the city, I care about black lives, and I back the blue, but I also don’t want this divisive nonsense in my streets because all it does is create problems.

So as soon as Mayor Battle said this wasn’t going to happen, I shut down my fundraiser and started the process of refunding the money.

Dale Jackson is a contributing writer to Yellowhammer News and hosts a talk show from 7-11 AM weekdays on WVNN.

A group of Birmingham City Police officers made a surprise visit to the son of Wytasha Carter, a police sergeant who was killed in 2019 while responding to a call at a nightclub.

The gesture went viral after the Birmingham Police Department posted it to social media, garnering more than 3,300 reactions.

The policemen reportedly gave the teenager, who was turning 16, a bag full of gifts.