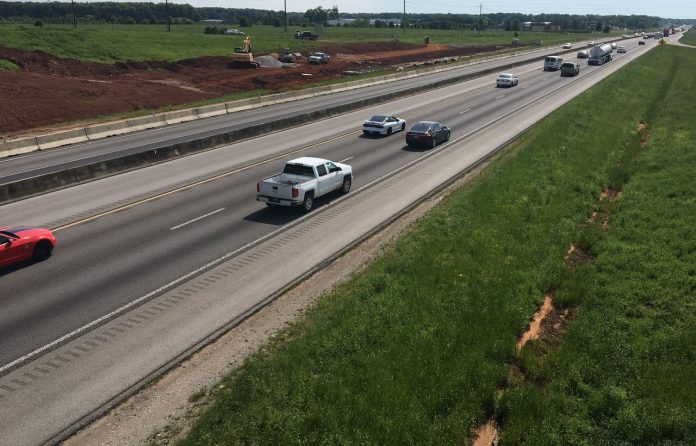 
The building of an additional traffic lane in each direction on I-565 – the interstate spur that connects Huntsville with I-65 – has slowed from initial projections.

The Alabama Department of Transportation said Friday that it is offering up to $1.25 million in incentives to the contractor awarded the project for finishing prior to Dec. 17, 2021. At one time, early in the design process, ALDOT said it hoped the project could be completed by the end of 2020.

The process is moving forward, though, as ALDOT said it has received bids from contractors. Construction is expected to begin in June or July, ALDOT said Friday.

The lowest submitted bid came from Reed Contracting in Huntsville with a bid of $14.3 million. The bids, opened Friday, must now undergo routine review by the highway department.

The winning contractor will receive $25,000 in incentives for each day the project finishes ahead of schedule up to $1.25 million.

The project will resurface about 7½ miles of I-565 from just west of Exit 1 (Interstate 65) to just west of Exit 7 (County Line Road). Paving on existing shoulders will expand the highway to three travel lanes in each direction.

Expanding traffic capacity on I-565 has been an issued pushed for years by Huntsville Mayor Tommy Battle and that need has only been increased with the ongoing construction of the Mazda Toyota automotive plant just north of I-565 in Limestone County. The $1.6 billion plant, at full production, will create 4,000 jobs.

Beyond the Mazda Toyota plant, companies supplying parts for the automobiles to be produced will grow the number of people working on the campus by hundreds.

Mazda Toyota, which originally planned to begin rolling its first vehicle of the assembly line in April 2021, has delayed that timeline with construction of the plant slowing due to the coronavirus pandemic.

The widening project, expected to ease bottleneck traffic entering and exiting Huntsville each morning and evening, won’t alleviate all congestion on the highway. I-565 will still narrow to two lanes in each direction from Wall-Triana Highway in Madison to the expanded highway just west of County Line Road. That’s a stretch of about a little more than 3 miles.