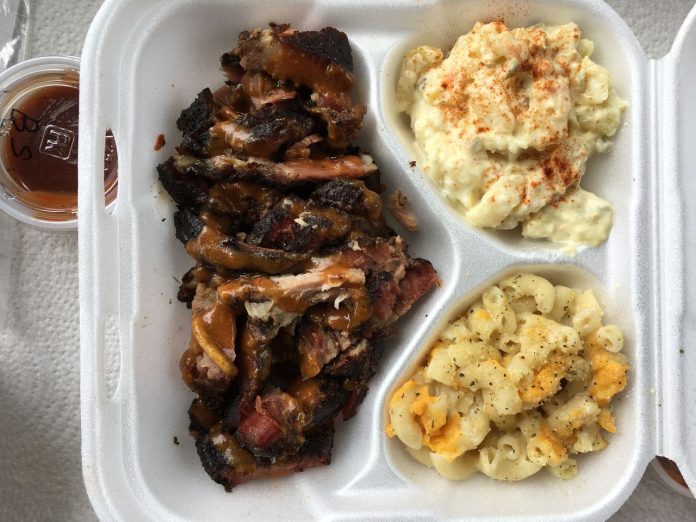 
Many times, I’d driven by the one-story gray building and wondered: What’s the deal with this place?

For a while now, the gray building’s signage had indicated it was a thrift store called Shirley’s Treasures. And certainly this looked a space that would house a thrift store - simple, solid and basic.

Then early this year, colorful flags promoting “Best BBQ Ribs” were installed out front. Tables and chairs appeared in a fenced in front patio.

Did this mean this thrift store was now also selling barbecue? Because if true, a barbecue-selling thrift store would be one of the “most Alabama” things to ever exist.

Turns out, both ribs and secondhand clothing can be obtained from inside this gray building at 1108 Andrew Jackson Way. Just from separate entities. Who are ... also related? I’ll explain.

Related, in that the proprietors of Shirley’s Treasures and WW Brookins Smoken On The Go are family. Shirley’s owner Tonia Caudle is the cousin of Smoken On The Go’s Wa’lisa Brookins-McCarter and niece of Susie Brookins, Wa’lisa’s mom.

“We’ve been knowing each other all our lives,” Tonia says, recalling times she and Wa’lisa played together as young girls. “Susie used to pick me up and keep me off the streets growing up and take me to church programs.” Wa’lisa adds, “Her mom and my parents were very close.”

While the Shirley's Treasures Thrift Store sign and "best BBQ" flags out front are more noticeable to drivers-by, thus seeding images of a rib-hawking clothier, a closer look reveals a less prominent sign for WW Brookins Smoken On The Go too.

Caudle opened Shirley's Treasures here about three years ago. The store is named for her deceased mother, who, back when Tonia was growing up, would shop for clothes for her daughter at thrift stores, bring those clothes home, wash and iron them to make them look sharp. "My mom always kept me dressed nice," Caudle says. "People would think we had money because I always had a lot of different clothes. I didn't understand why I had to get clothes from a thrift store and I would be mad and embarrassed and just wait in the car. But that's what we had to do."

Shirley's Treasures sells new and used clothing for women, as well as shoes, purses and jewelry. Polka dots, tassels, paisleys, stripes and faux fur adorn various wares there. "The people who come in here, I get a kick out of seeing them dress very nice," says Caudle who previously worked jobs in home health care and nursing homes.

A couple years or so back, Caudle asked Brookins to cater an event at the thrift store. "It was a big success," Caudle says. "Not only for her but also for me. People started asking for her. 'Where's that lady with the good barbecue at? When's she coming back?'"

Inside 1108 Andrew Jackson, the entrance for Shirley’s Treasures is to the immediate left. Upon first entering the building, Smoken On The Go’s cashier/hostess stand is the first thing you see, and the restaurant’s dining room is to the right, down a hallway decorated with jewelry for sale and the small framed image of a cartoon pig.

The Brookins family has been catering barbecue for about 10 years. It all started with Walter Brookins, Susie's husband and Wa'lisa's dad. A retired Army sergeant, Walter "loved cooking outside," Susie recalls. "He'd let me cook inside during the wintertime, but when the springtime comes, that was his."

Walter designed a smokehouse that he had built outside the family's Northwest Huntsville residence. It's actually a two-building layout: One building, a prep house for storage and food-prep; the second, the actual smokehouse with a smoker big enough to hold 12 whole turkeys, ribs, etc.

Walter and Susie's "how we first met" story is a good one. She was an Alabama A&M student from Huntsville, and he was a young Army recruit from Sarasota, Fla. They met entirely by chance at the Greyhound bus station in Nashville. Susie had taken a bus to visit her sister, who'd just had a baby. After finishing basic training, Walter was supposed to take a bus to Fort Campbell in Kentucky, but mistakenly got on another bus headed to Fort Knox. When he realized the gaffe and returned to the bus station to catch the correct bus, that's when they met.

They married around six months after meeting. The Brookins couple went on to be married 42 years, up until Walter died in September 2016. Having been at Walter’s side the many times he worked through the night on his smokey labor of love, Susie knew how to smoke the meats and everything else that went into the business. After teaching school for 30 years, starting off with kindergarten at Whitesburg Elementary, Susie knows a thing or two about learning.

On a recent afternoon inside their low-key white-walled Andrew Jackson space, Wa’lisa says, “We were going to open a place like this but he became too ill.” Still, the decision to keep WW Brookins Smoken On The Go going was easy, Susie says. “That’s the only way I could live without him,” Susie says, “is to carry on his business and his dream.”

With Walter gone, Susie stepped up as the smokehouse's pit boss. In case you're wondering the "WW" in WW Brookins Smoken On The Go refers to Walter and Wa'lisa. "When we did our sign only had room for the two Ws," Wa'lisa explains."

Early on, after getting licensing and other paperwork, Susie says their catering got started with church groups, weddings and repasts, the dinners sometimes held after funerals. Since the Brookinses smoke turkeys, Thanksgiving has been a big thing for their business, to this day. They use hickory wood to smoke all their smoked items.

After their catered for Shirley’s Treasures went well, Caudle asked Susie back to cater another event at the store. “The neighbors started asking if I was going to stay this time,” Susie says. “We already had the smokehouse and licensing so I just started looking. Started with one room, two rooms. Then once I started frying fish and my line was back out the door I said, ‘OK, Lord, what are you trying to tell me?’ So then I just went and did the whole thing.”

WW Brookins Smoken On The Go and Little Diner, as Susie calls the Andrew Jackson location, has been open since January. Just a couple months later, coronavirus threw a Saturn V rocket-sized nail in the road for restaurants worldwide. "We've just been blessed by the neighborhood to still be working, still be here," Wa'lisa says.

Most of Smoken On The Go's orders are take-out, understandable given the pandemic. But Wa'lisa says the patio also sees some action. Inside the building, there's also a cozy dining room that seats around 15 or so. A large portrait of Walter Brookins lights up the room. As in his handsome image actually seems to illuminate the place a little more.

At the diner, ribs and chicken-wings are the best-sellers, Susie says. They recently added weekend breakfast items, including a smoked sausage sandwich. A couple weeks ago, curious to know more about what goes on inside 1107 Andrew Jackson, I called in take-out order: A pulled pork dinner ($9 with smoked mac & cheese and potato salad, plus a "regular" size banana pudding ($3). Arriving there about five minutes later, a friendly and pandemic-masked employee was up front, waiting with my order loaded into a repurposed cardboard box.

Back out in my car, lifted up the clamshell to check out the goods. It looked and smelled like real-deal un-corporate Alabama barbecue, and a few minutes later back at my house it ate like it too. The pork and mac both benefiting from smooth, enticing smoke notes. The pot salad, family cookout fresh. Two sauces - the one drizzled atop the pork, sweet/sticky, the other, on the side, tangy/peppery.

The banana pudding was creamy-fruity-cookie bliss. Liked my entire order enough a week later called back in for a half-rack of ribs. I don’t eat much meat these days so this was a decadent/barbaric eat. The ribs gave my incisors their biggest workout in a while - and were the right balance of tender, char and marble. A couple visits in, this place feels like nice hyper-local addition to Five Points eats.

During a phone conversation with Susie, I ask her what Walter would think of his smokehouse dreams finally manifested into a little diner. "He would be grinning from ear to ear," she says. " That is what he worked so hard on and to see it complete and functioning, he would be so excited."