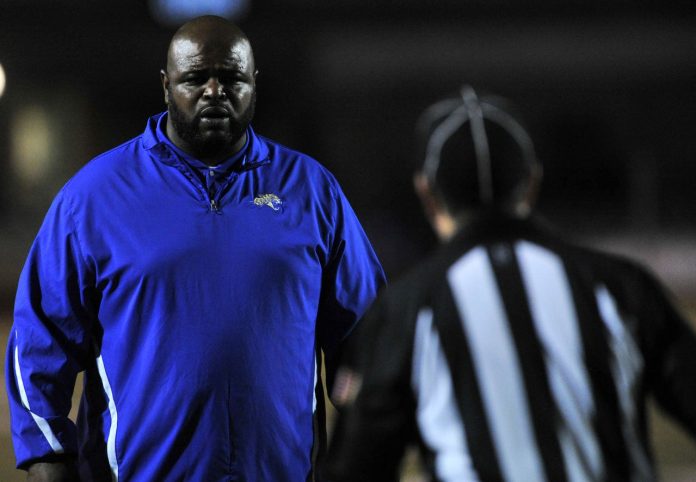 
One month after former Alabama standout Kelvis White was named the new head football coach at Bob Jones on Valentine’s Day, the sporting world took a three-month break due to the coronavirus pandemic.

White, a four-year Academic All-SEC selection at Alabama and former head coach at Dothan High and Mae Jemison, had time to meet most of his new players before the break but not much else.

He and his staff will get back to work face-to-face with his Bob Jones athletes next week when schools officially re-open on June 1. Prior to that, however, White sat down with AL.com to talk about his career on the field and in coaching, his time in Tuscaloosa and the lessons he learned from his father, former Courtland coach Louis White.

Coming into a new job and faced with the pandemic shutdown, do you feel like you are behind schedule?

“A little, but everyone is in the same situation. For all the new coaches, we are probably a step behind with just not having spring practice. That is so important when you are new, but these zoom meetings have helped us all.”

You have been in the sport for a long time. Have you seen anything comparable to what we’ve been facing the last three months?

“Never. This is definitely unprecedented. We’ve faced a lot of different challenges in the past with hurricanes and such, but never to this extent. I think the state has done a great job of easing us back into activities, and I’m optimistic that we will be ready to go in the fall.”

You were at Mae Jemison for four years. What made Bob Jones the right move for you at this time?

“I think just the tradition. It’s a great community in Madison and also the opportunity to play at the highest level. Class 7A is very competitive in the state. When you added all those factors up, it was somewhere I definitely wanted to be.”

Your dad obviously won multiple state titles at Courtland. Did you always want to follow in his footsteps and be a coach?

“Definitely. It’s the family business it seems like. Growing up watching my dad coach and me playing football, it just seemed like the natural thing to do. Coaching was the closest way to be around it if you aren’t playing anymore. I’m from an educational family. My mom, dad, sister, brother are all coaches and/or teachers. Working with kids is a passion for me and my family.”

What is the biggest lesson you learned from your father?

“There’s been a lot. I just kind of watched his work ethic growing up, watched how much he poured into that program and into his kids, and I’ve tried to emulate that at every job I’ve had. He gave it his all and got great results. That is something I try to do as well.”

At Alabama, you played for two head coaches – Gene Stallings and Mike DuBose – and stayed for a year to coach under Dennis Franchione. What did you learn?

“All of them had different ways. With coach Stallings, you just learned how to run a program. He meant business. He was very serious but also was a players’ coach. Honestly, I was a little intimidated by him, but I enjoyed playing for him. If you fast forward to today, I still see him whenever I can at different functions. He’s been a huge influence.”

Anything stick out about coach DuBose or coach Franchione?

“I enjoyed playing for coach DuBose as well. Even though our record didn’t always indicate it, he did a good job leading the program. He was a little more hands-on than coach Stallings in some ways. I was only there briefly with coach Franchione, but he was highly organized. The way he ran his program was impressive.”

What is the top memory of your Alabama career?

“There are a lot of them. I guess the most memorable experience was that entire 1999 season when we won the SEC championship and beat Florida twice. That team, that group, that season was special all the way around.”

Did injuries derail any chance you had to continue playing football after college?

“For sure. I ended up having three knee surgeries at Alabama. My senior year, it was bone on bone in my right knee. Some of the doctors advised me not to play, but I fought through it. I had a lot of pre- and post-practice treatment. I was fortunate to even play my senior year, but I’m glad I did. I don’t regret it even though we weren’t successful. After that, I knew football was over.”

Was it tough to give it up as a player?

“Definitely. I had been playing as long as I could remember. I remember that last game. We were playing Auburn in Tuscaloosa. We lost that game (9-0). I just remember walking off the field. It was tough. But being around the game as a coach makes it a lot better. It’s really been rewarding.”

At Bob Jones, you will get to face your older brother (Sparkman coach) Laron (White) every year in a Class 7A, Region 4 game. Fun or not fun?

“It’s going to be fun. The first year I was at Mae Jemison and he was at Tanner we played. It was crazy with all the family there. We look at it as being one week out of the year. After that we can go back to being a normal family.”

Will you see him much that week?

“We won’t talk much that week. I’ve had to change a little over the years. We used to bounce ideas off each other all the time. Now, I’ve had to be quieter on that. I don’t want him to know all my secrets.”