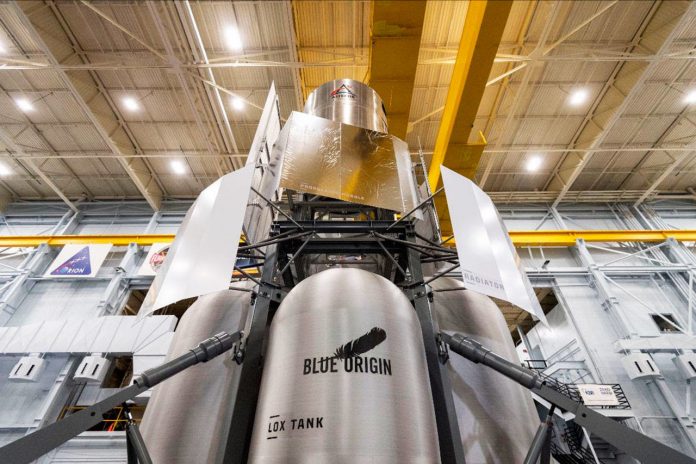 
Kent-based Blue Origin took another step in its role to return American astronauts to the Moon in 2024 when the Human Landing System National Team – comprised of Blue Origin, Lockheed Martin, Northrop Grumman, and Draper – delivered an engineering mockup of a crew lander vehicle Thursday at the NASA Johnson Space Center in Houston.

The lander is set up in the Space Vehicle Mockup Facility, NASA Johnson Space Center’s iconic Building 9, where astronauts train and scientists and engineers develop the next generation of space exploration vehicles.

The full-scale engineering mockup showcases two elements of the National Team’s multi-element architecture – the Ascent Element and Descent Element. Standing at more than 40 feet, it is the Blue Origin National Team’s update to Apollo’s Lunar Module and will be used to validate the National Team’s approaches for getting crew, equipment, supplies, and samples off and on the vehicle, according to a Blue Origin email. The team will collaborate with NASA organizations including Johnson Space Center’s Astronaut Office to perform engineering and crew operations tests with astronauts aiming to fly the final system within several years.

“Testing this engineering mockup for crew interaction is a step toward making this historic mission real,” said Brent Sherwood, vice president of Blue Origin’s Advanced Development Programs, in an email. “The learning we get from full-scale mockups can’t be done any other way. Benefitting from NASA’s expertise and feedback at this early stage allows us to develop a safe commercial system that meets the agency’s needs.”

Blue Origin, owned by Amazon founder Jeff Bezos, opened in Kent in 2000. The company built opened a new headquarters in January along 76th Avenue South, and is expected to employ more than 4,000 by the end of the year, according to city of Kent officials.

The National Team Human Landing System design leverages significant prior work, flight heritage and a modular solution, according to the email. Modular solutions help to enable faster progress due to the independent development and testing of each element, which permits ongoing improvements and evolution without impacting the full system. This also provides flexibility in the use of different launch vehicles and different concepts of operations.

The Descent Element is based on Blue Origin’s Blue Moon cargo lander and BE-7 LOX/hydrogen engine, both in development for more than three years. The Ascent Element incorporates avionics, software, life support hardware, crew interfaces, and mission operations from Lockheed Martin’s human-rated, deep-space Orion vehicle that will fly on the Artemis I and II missions, according to the email.

A consistent cockpit experience and training from Orion to the Ascent Element makes the end-to-end mission safer for Artemis. The Transfer Element, a propulsive stage that starts the lander on its descent trajectory from lunar orbit, is based on Northrop Grumman’s Cygnus vehicle that provides logistics resupply to the International Space Station; and Draper provides descent guidance and avionics to the National Team.

“Each partner brings its own outstanding legacy to the National Team,” said Kirk Shireman, vice president of Lunar Campaigns at Lockheed Martin Space. “These include developing, integrating, and operating human-rated spacecraft, launch systems and planetary landers. Together we form an excellent team to send our next astronauts to the Moon in 2024. Augmenting state of the art tools with physically being able to see, interact, and evaluate a full-up lander in person is critical. It will inform our design and requirements earlier in the program allowing us to accelerate our development and meet the 2024 lunar landing goal.”

The mockup will remain at Johnson Space Center through early 2021 for a series of tests and simulations. Over the coming months, the National Team will continue to build and increase mockup fidelity. NASA’s Human Landing System Program is managed at Marshall Space Flight Center in Huntsville, Alabama.

In April, NASA selected Blue Origin and the other companies to help return humans to the moon. The total combined value for all awarded contracts is $967 million for the 10-month base period, according to NASA.

About the National Team

The Blue Origin-led National Team, which is comprised of Blue Origin, Lockheed Martin, Northrop Grumman, and Draper, is working to offer a Human Landing System for NASA’s Artemis program to return Americans to the lunar surface – this time to stay.

To share your opinion for publication, submit a letter through our website . Include your name, address and daytime phone number. (We’ll only publish your name and hometown.) Please keep letters to 300 words or less.