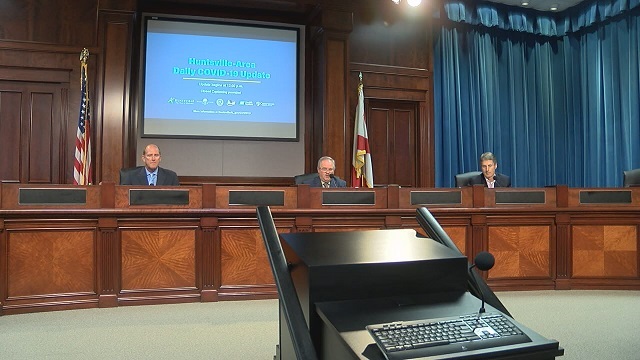 
WAAY 31 asked area leaders at Huntsville City Hall on Wednesday about the return to school.

David Spillers, Huntsville Hospital CEO, and Paul Finley, mayor of Madison, both said they support the school districts heading back to traditional schools, but it's inevitable we will see students in schools test positive for coronavirus. It's something we’re already seeing at schools back in session.

"We're going to continue to hear cases as kids get together, and they're doing everything they can to plan for that to prepare for that. I think we are just going to have to deal with that," Finley said.

Spillers said he thinks the cases started before students went back to school.

"I think Lincoln County had a little spike before school started, so my guess is a lot of these positive cases had nothing to do with school. They were in the community and they just happened to show up when people started to go back to school," he said.

Alabama’s Department of Public Health said all school systems need to contract trace and identify anyone in contact with someone who has the virus.

Spillers said what happens in the next month with another holidayand students in school will show if the virus is under control in the area.

"We really need to manage Labor Day and hopefully the school systems will manage the students coming in and those two things won't create another blip in the system, so that we're sitting here a month or 6 weeks from now with another problem on our hands," he said.

All three school districts in Madison County are starting the school year virtual, but officials from Huntsville City have said students might be able to head back for in person instruction before the end of the first nine weeks depending on what is happening with the virus.