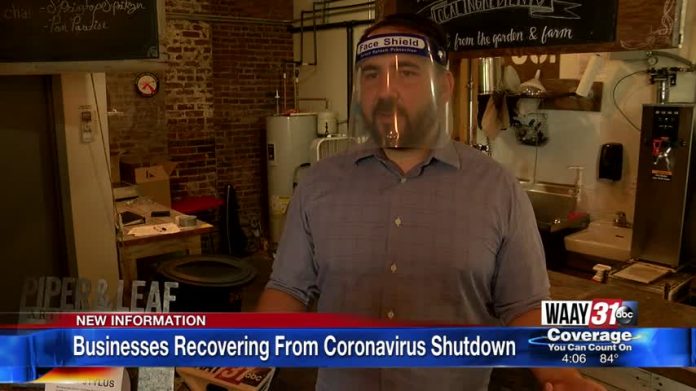 Unemployment numbers are declining, according to a report released by the Bureau of Labor Statistics Thursday.

The report states that numbers dropped 2.2% to 11.1% and added a record 4.8-million jobs
in June -- the second consecutive month of job growth after the economy lost 20 million jobs in April alone.

Some of those were here in North Alabama. Local businesses, still recovering from the shutdown, have considered PPP loans a saving grace. Now, the loans are allowing some to bring back staff, and, in some cases, afford them the ability to hire more.

"That's one of the reasons why we're able to reopen today is being able to bring people back, partially through that PPP usage,” Connor Knapp, co-owner of PIPER AND LEAF, said.

Knapp was able to open the doors to his Lowe Mill location Thursday for the first time in nearly three months, when the historic art center fully reopened.

"We've got to get some of these things ironed out again because we've been out of here for so long,” Knapp told WAAY 31. “So it's both super exciting and even a little scary."

According to Knapp, the Paycheck Protection Program loan allowed him to bring the location's manager back and, in doing so, reopen.

"That's one of the things that using things like the PPP has allowed us to do, is to grow and expand in certain areas. So we actually are hiring -- not only for here, but for some of our other initiatives as well."

9Round 30 minute kick box fitness, another Huntsville PPP recipient, didn't have to let any employees go.

Owner Steve Bump said he paid workers out of his own pocket to keep them employed before the loan kicked in.

"I just felt it was the right thing to do in order to just give them some income for the first few weeks - or month a half actually - before we actually got our PPP loan funded to us. "

Bump says the money really helped with the transition to reopening, rather than paying his employees.

Bump says he believes his business will be fine but told WAAY 31 that if another forced closure were to happen, he couldn't guarantee that they'd reopen.