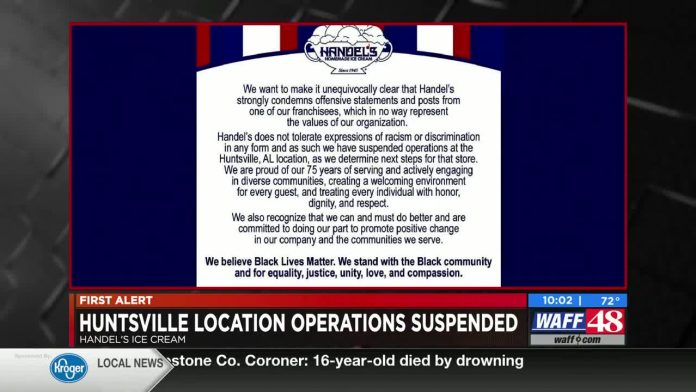 HUNTSVILLE, Ala. (WAFF) - The Handel’s corporate office is suspending operations at its Madison County location and determining next steps. They say they do not tolerate expressions of racism or discrimination in any form.

In 2015, Rick Jarrell, the franchise owner of Handel’s Ice Cream, on Highway 72 in Huntsville, posted racial slurs on Facebook about growing up in Birmingham in the 1950′s. Because of that post he has temporarily closed shop.

On a typical warm June afternoon, the Handel’s parking lot would be filled with eager customers ready to enjoy some homemade ice cream. But not on Tuesday. Instead of sweet treats these customers are looking for answers. “I was just coming to speak with him and see, let him clear the air and try to at least move the conversation forward,” said Quinton Anderson. Anderson was greeted with a handwritten note notifying him Handel’s was closed. “I really do think he didn’t want to speak. He didn’t want to deal with any of the issues that comes with his words.”

“All I ask is that you read the entire post. It reflects life in Birmingham in the 1950’s and 1960’s. I was never raised to be a racist and that is what the post says. I have black nephews, black cousins, and my daughter’s boyfriend is black. This whole ordeal was started by a former employee (who was fired). Look at my actions. Look at my life. Read the entire post."

“In an old Facebook post of mine, I used some inappropriate and hurtful language to describe African-Americans and other minorities. I sincerely apologize for my word choice. It wasn’t my intent to be insensitive, but looking back, I see that I was and for that I am deeply sorry.”

“We would like to apologize for recent social media posts that have come to our attention. These views do not represent our brand, our employees, vendors, or franchise partners, and we are troubled by the offensive tone that these messages conveyed. Handel's Ice Cream has been serving generations for 75 years and we are proud of the relationships we have built in the communities that we serve. We are disappointed that we need to address this situation, but we will not ignore it nor condone it. Our mission continues to be one of exceeding expectations while serving the best ice cream on the planet.”