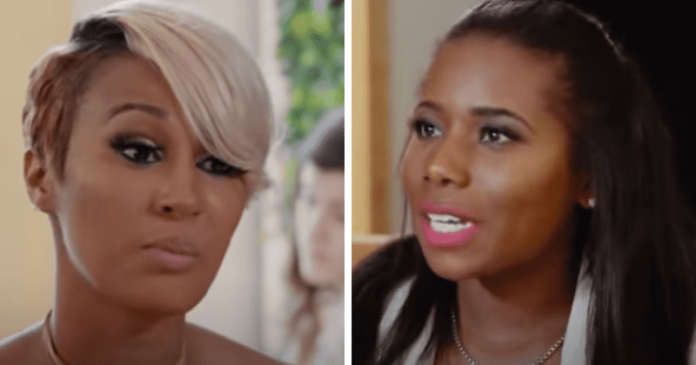 On Saturday night's explosive episode of 'Love and Marriage: Huntsville', Melody Holt pulled out all stops in sending out a message that she's not ready to make amends and repair her soured friendship with LaTisha Scott.

Melody had been working on her skincare brand for two years. Five weeks after the birth of her baby Malani, which was documented in the episode as well, Melody hosted an event for friends and family where they could get a feel of the products from her line. Kimmi Scott and Destiny were among those present at the event and just like Melody's baby shower, LaTisha was kept out of the guest list on this one. However, the latter came to the event to show her support. In her interaction with sister-in-law and friend Kimmi, LaTisha said, "Since I've been growing professionally, I also wanted to grow personally so I thought I am going to step out and show up for her event."

LaTisha might have meant well by showing up for the event but Melody was not in the mood to forgive and forget just yet. She was surprised to see LaTisha at the event who she also referred to as a "loose cannonball" while pondering on her audacity for showing up at her event, in a confessional. She huffed outside the venue, dragging Martell along with her and shortly after, she summoned the security present at the venue, asking if he was permitted to escort crashers out of the event. After he answered in the positive, she pointed out to LaTisha and the security moved ahead to do her bidding.

For the uninitiated, LaTisha and Melody's friendship went kaput after Martell attacked LaTisha's husband Marsau verbally. After Martell's cheating scandal was revealed to the world, he decided to insinuate that Marsau has his own set of skeletons in the closet and this is what marked the beginning of their feud. LaTisha had confronted Melody about Martell's "false statements" against Marsau to which Melody just brushed it off saying how was she so sure about them being false. Since then the Holts and the Scotts have been at loggerheads and Melody even kept them out of her baby shower that was documented in the previous episode. On being confronted as to why she would not let bygones be bygones, Melody clarified that she wasn't happy about LaTisha retweeting negative statements made against her.

Do you think Melody overreacted while throwing LaTisha out of the event? And do you think they should rekindle their friendship? Let us know in the comments.