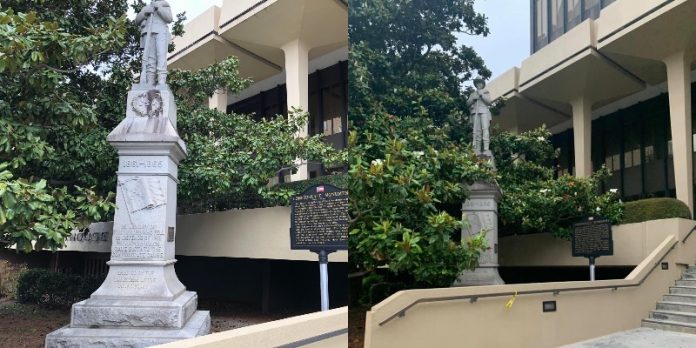 
The Madison County Commission unanimously passed a resolution on Wednesday that aims to move the monument to Confederate soldiers away from the grounds of the county courthouse.

The resolution charges Commission Chair Dale Strong with the task of finding a proper location for the statue and navigating the legal pathways to get it there.

The County Commission and City of Huntsville say they will work together on the initiative.

Strong said he believes the decision to move the monument is “fair and works for the people of all of Madison County,” according to Alabama Media Group.

The resolution for the removal was introduced by Commissioner JesHenry Malone, who clarified in the meeting that the county was “not planning to back a truck up to the statue with a chain and pull the thing down.”

The etching on the base of the monument in question, which was first erected in 1905, reads, “In memory of the heroes who fell in defense of the principles which gave birth to the Confederate cause.”

Prominent business groups in the Rocket City like Downtown Huntsville Inc. and the Committee of 100 have come out in support of the monument’s removal in recent weeks.

The Memorial Preservation Act of 2017 prevents any historic item over 40 years old from being removed from public grounds, punishable by a $25,000 fine.

The Memorial Preservation Act does allow for certain organizations to seek a waiver from a state committee that allows for the legal removal of a historic item.

A local progressive group has raised $25,000 to support the monument’s removal if a waiver cannot be granted, which is a situation the local county and municipal governments are trying to avoid.

The Huntsville mayor’s statement reads, “The City of Huntsville pledges to work hand in hand with the Madison County Commission to help them find a suitable home for the monument in an appropriate historic context.”

The County Commission’s full resolution can be read here.

Henry Thornton is a staff writer for Yellowhammer News. You can contact him by email: [email protected] or on Twitter @HenryThornton95