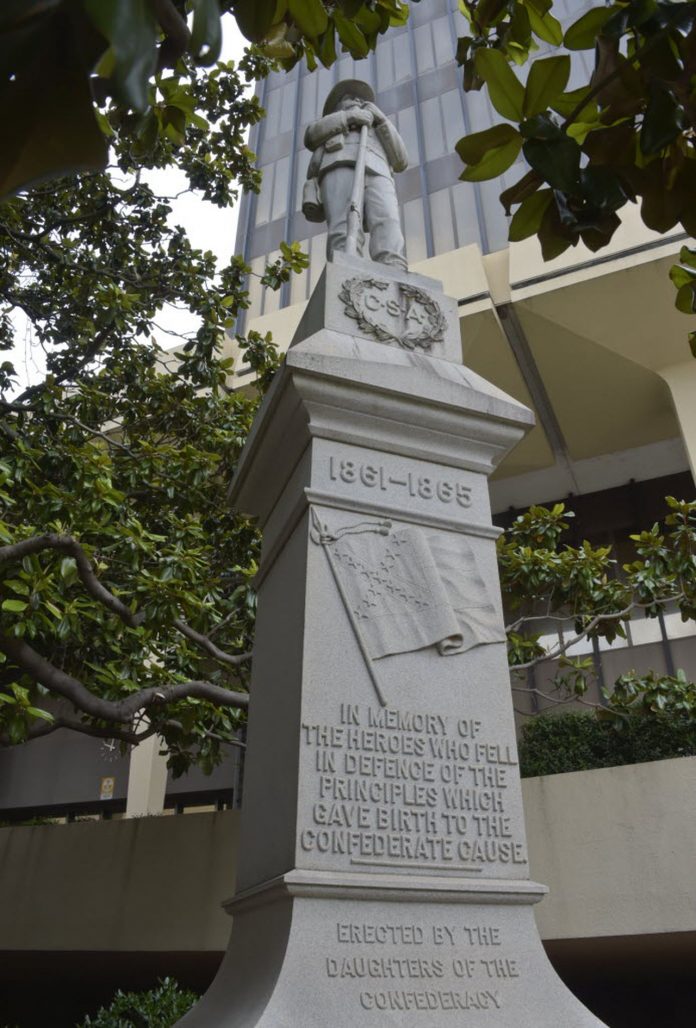 
Madison County Commission Chair Dale Strong said Monday he believes there is a compelling case to be made for the removal and relocation of the Confederate monument outside the courthouse in downtown Huntsville.

Whether a committee established by state law to remove such request agrees remains to be seen.

Strong listed off several mitigating factors that he believes could add up to a convincing case to move the monument erected in 1905. The commission last week unanimously voted to submit an application to the Committee on Alabama Monument Protection for permission to remove the monument. The Huntsville city council also voted without dissent to support the commission’s effort.

"There's a lot of things there," Strong said. "Our thing is to petition this committee, say this is where we're at in Madison County, maybe we a have a better option there for preservation of history and artifacts and those are options being looked at. We are looking at every option within the law to see what options are there."

The committee is scheduled to meet July 9 in Montgomery and Strong said it was the commission’s intention to have its case heard at that meeting. The committee would then have 90 days to render a decision.

That application will also include a recommendation on where to relocate the monument. Strong on Monday mentioned Maple Hill Cemetery in Huntsville as an option because of its historical significance. Hundreds of Confederate soldiers are buried at the city-owned cemetery.

"We've got a plan in place that I think is a good resolution for everyone involved," Strong said. "This is the process by law that we have to go by and that's what we're going to do."

Still, the law does not appear to be on the commission’s side. The law does not permit the review committee to consider historical structures that have been in place for more than 40 years. And it’s unclear if the few exceptions spelled out in the law would apply to the monument in Huntsville.

"I understand what the law says," Strong said, "but there are also some mitigating factors in that law that’s something that may need to be looked at."

One of the more dramatic considerations raised by Strong are plans to expand the courthouse located in the tight-fitting downtown square. The monument is located only a couple of feet from the walkway around the courthouse on the west side and should the courthouse be expanded on that side, the monument would seemingly be affected.

Such an expansion project is not imminent, though, as work continues on the 60,000 square foot Madison County Services Center on Oakwood Avenue – a project designed to ease overcrowding in the courthouse and make high-traffic courthouse offices more accessible in the new building with hundreds of parking spaces.

"Everybody knows that we're now in a construction project of the Madison County Services Center, 60,000 square feet with one objective: To make it better public access," Strong said. "But we also have a problem with not enough judges, not enough room in the courthouse right now. The 23rd (Judicial) Circuit is strapped for space. Even if we were awarded another judge right now, we have nowhere to put them.

"We have dealt with ADA compliance in past years and one of the things everybody knows, as soon as we deal with Madison County Services Center that we've got to renovate the exterior and interior the Madison County Courthouse to better service the people. There's a lot of moving parts there that we're having to look at. Those are some of the things we're trying to evaluate."

Among the law's exceptions are if, in this case, the monument interferes with utility service or the building of a roadway. Expansion on the courthouse's west side – the main entrance to the courthouse – could also result in a shifting of West Side Square, the two-lane road nearest the courthouse.

Strong also raised concerns about maintenance of the monument, which is largely obscured by a magnolia tree on the courthouse grounds.

Asked about the fact that the upper part of the monument – a statue of an unnamed soldier – being destroyed in a construction accident in the 1960s could be a mitigating factor, Strong said, " It is being included in this petition. I don’t know if it will make it less historical."

The commission would face a fine of $25,000 if it removed the statue without permission, according to the law. A grassroots organization, Tennessee Valley Progressive Alliance, said it has raised the money to pay for the fine.

Removing the statue has received widespread support from the community in recent days.

“What we’re trying to say is, I think this is the safest way to preserve history in finding a better location than where it is located right now and that is the objective,” Strong said.