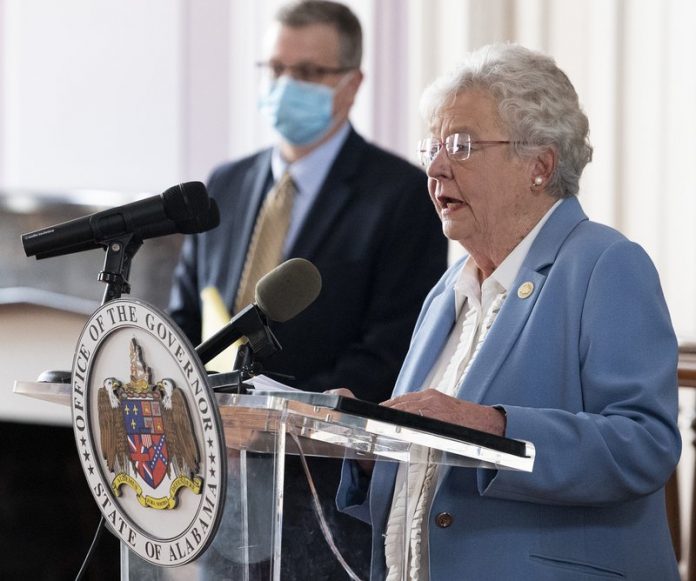 
A new health rule mandating face masks in public in Alabama was off to an uneven start Friday, with many people covering up to prevent the spread of the new coronavirus, others refusing and authorities taking a generally hands-off approach to enforcement.

The virus that causes COVID-19 is raging through the state, with more than 1,500 cases reported each day over the last week and hospital intensive care units more than 85% full. Officials described the mask requirement as an attempt to avoid another shutdown of the economy.

At a strip mall in heavily Republican Shelby County south of Birmingham, most people coming and going from shops wore cloth face masks. A customer at a UPS store in Pelham apologized out loud for forgetting hers; everyone else inside wore a mask or a plastic face shield.

A few miles away at a Home Depot store, most customers and employees wore masks, yet a few refused offers of a free mask as they entered the retailer, a worker said.

“It’s better than it was but it’s not 100%,” said the employee, who wasn’t authorized to speak publicly. “We’re getting some resistance.”

The rule requires a mask for anyone older than 6 who’s in public and within 6 feet (2 meters) of someone who’s not a relative. Businesses are not required to prohibit people from entering if they lack masks, but they are allowed to refuse admittance.

Gov. Kay Ivey announced the mask rule, which took effect Thursday afternoon, as cases of COVID-19, the illness caused by the coronavirus, increased dramatically this week. She said violators could face fines of $500 and jail time, but added that enforcement would be difficult and penalties weren’t the goal.

“We’re certainly not asking our sheriffs and police officers to go out looking for people who are not wearing a mask and arrest them. But we are asking everyone to do a better job of practicing social distancing, personal hygiene and wearing face masks,” Ivey said in announcing the rule.

Some police agencies said they would provide face masks to people not wearing them in public, but others indicated officers wouldn’t get involved.

“We as law enforcement are NOT the social distancing police OR the face mask police. Just be responsible, that’s all, and be safe,” the Bay Minette Police Department announced in a post on Facebook.

In Decatur, which has a municipal ordinance requiring face masks, police spokeswoman Emily Long said the department had masks available for citizens at headquarters.

“If we get a call from a citizen or business owner, we educate, warn, cite, and, as a last resort, we can arrest,” Long said in an email.

Near Decatur in Huntsville, a restaurant said it was banning Ivey, area political leaders and health department officials for imposing the rule.

“These orders create unnecessary stress, liability, and physical, mental and financial burdens on the restaurant and its employees,” said a social media message by Mike Heffelfinger, who identified himself as the owner of Johnny’s Johnny Gryll’s II.

A Piggly Wiggly grocery in Walker County announced on social media that it would welcome anyone without a mask under the assumption they had a medical condition that prevents usage.

The disease has infected more than 62,000 people statewide and killed more than 1,230, state statistics show. While most people suffer only mild to moderate symptoms and recovery, it can be deadly for the elderly and people with other conditions.

A statement by the Medical Association of the State of Alabama said it supported making people wear masks in public.

“We want the economy open. We want businesses open. We want schools open. The best way to do this is to wash your hands, socially distance, and wear a mask/face covering over the mouth and nose to lower the spread of droplets that contain the virus,” Dr. Aruna Arora, the incoming president of the organization.

State Sen. Randy Price, R-Opelika, also encouraged people to wear masks and take other steps to protect against disease in a statement that said both he and his wife Oline had been diagnosed with COVID-19.

Republished with the permission of the Associated Press.