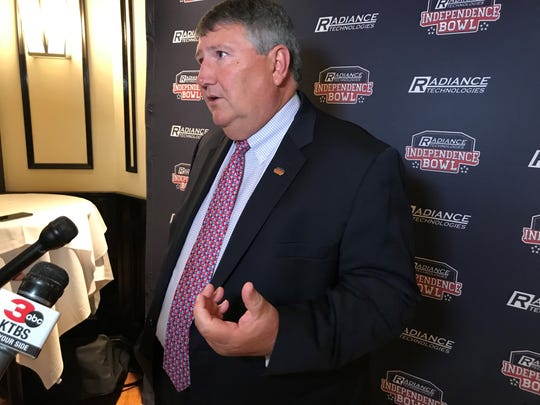 Bill Bailey's journey from young airman at Barksdale Air Force Base to chief executive officer of a $200 million company is the stuff of the American Dream.

"When he's telling his story, you feel like pumping your fist and saying, 'This is awesome. This is awesome,''' says I-Bowl Executive Director Missy Setters.

Bailey, Radiance Technologies' CEO, has helped raise his company's value to new heights. Now he hopes to write another chapter to his story by helping the Independence Bowl not only survive, but thrive.

Bill Bailey grew up in Alabama and married his wife, Sharon, while in high school. The couple, who have been married 41 years, moved to Louisiana as teenagers. Here, Bill Bailey would begin his professional life in the Air Force.

"I lived in Bossier City for seven-and-a-half years,'' Bill Bailey says. "I did four years on the front line at Barksdale as a young airman. I went to school at night and I got accepted for a scholarship program. They sent me off for two-and-a-half years to get a college degree in (electrical) engineering. They sent me to Louisiana Tech, so I've got about seven-and-half years living in the area.''

Bailey graduated from Tech in 1987 and he currently sits on the school's Education and Science Foundation Board. He has also been a Louisiana Tech football season ticket holder for more than 20 years.

He said he bought 20 tickets to last season's Independence Bowl between La. Tech and Miami and donated them to the military because of the Dec. 26 playing date.

Thirty-three years after graduation, Bill Bailey considers his time in Ruston to be pivotal for his success.

"I came here as a dumb country boy,'' he says. "And I left with a college education and well educated to take care of my family. A lot of skills I gained in college have been the skills that were the key to me becoming a CEO of an almost $200 million company. It all seemed to line up.''

He put his degree in engineering to use and by 1996 he was an engineer for SPARTA, a company that says it "provides world-class technical products and services to the defense, intelligence and homeland security sectors of the US federal government.''

After four years with SPARTA, Bailey moved over to employee-owned Radiance Technologies based in Huntsville, Alabama. He quickly moved up to senior vice president in 2001. He also served as Manager of the Intelligence Systems Group.

It was during his time as vice president that he met Auer.

"We were introduced by Gen. Bob Elder,'' Auer says. "Bill's company was in the business of writing software and doing other work, technical work for the Department of Defense and we (at Praeses) wanted to get into that line of work.

"Gen. Elder liked some of our technology and said, 'You just need to work on the business part of it and Bill Bailey can help you with that.' He introduced us one day at lunch. And sure enough, he contributed a resource to us and helped us win a small contract with the Air Force and we've been brewing it ever since.''

That was 12 years ago. Their friendship has grown over the years and the two have continued doing business.

As the friendship grew, Auer learned more and more about the man who would one day run Radiance Technologies.

The company ended 2012 with $140 million in revenue when Bailey became president.

“Bill has demonstrated a very good understanding of the intelligence and defense business, and is well versed in business development and proposal preparation (evidenced by the recent competitive win of the Air Force Agile Cyber Technology Program),'' Clark said at the time.

Under Bailey's leadership, the company has continued its growth. And in May of last year, he was named the chief executive officer.

"We do a lot of cyber work,'' he says. "We do a lot of work for the intelligence community. I can't say a lot about that. If you look at our portfolio, I think you would see it's almost 100 percent defense. We supply to the Boeings and the Lockheeds, the larger companies, or we supply a direct customer.''

With roughly 900 employees, Radiance Technologies isn't exactly a small business. But it's also one that has room for growth.

And that desire for growth is what attracted Bailey to the Independence Bowl.

"We are a small business in the defense sector,'' he says. "We're growing rapidly. We 're going to outgrow that. We didn't want to be branded as a small business. We were looking for ways that we could sponsor things and brand us as a big business,'' Bailey says.

At the same time, his friend Auer was stepping up to be I-Bowl chairman and looking for a title sponsor.

It didn't take long for the two to connect.

"He (Auer) said, 'Hey, we need a sponsor,''' Bailey recalls. "We were looking for a way to raise our brand and make the whole country more familiar with Radiance Technologies. But we were also looking for ways to lay down a market and say we're going to commit to the Shreveport-Bossier area and Louisiana. And the Independence Bowl kind of lined up with all of those.''