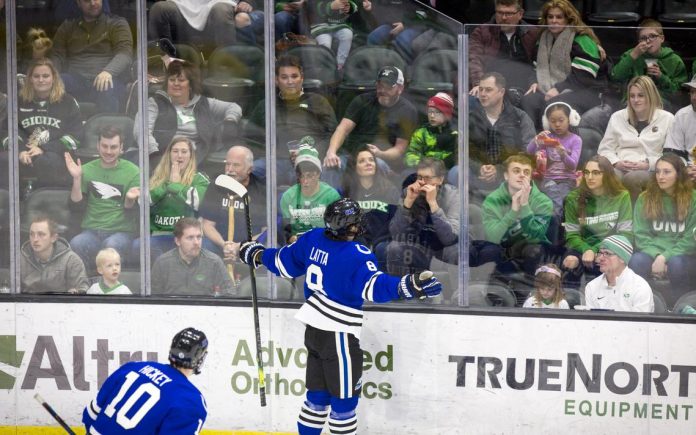 Alabama Huntsville announced Friday that it will drop its men's hockey program.

It's tough news for the men's college hockey world, which is always hoping to grow the number of teams that sponsor the sport. But in keeping perspective, college hockey has actually been on a pretty good run lately.

Losing Huntsville marks the first time since Wayne State (Mich.) in 2008 that a Division-I men's program has folded. According to USCHO's college hockey timeline, that's the longest stretch without losing a Division-I men's team in 47 years.

During that time, Division-I has expanded. In the last 30 years, it has gone from 48 to 60 teams.

Since Wayne State folded in 2008, college hockey has added Penn State and Arizona State. Long Island University also announced it plans to start a program this fall, and Illinois was on the verge of adding men's hockey when the coronavirus pandemic put it to a halt for now.

The Alaska schools have been on the brink due to statewide budget cuts and may not survive the pandemic and conference shifting, either.

The is the second time Huntsville has announced it is ending its men's hockey program.

Huntsville announced in 2012 that it was cutting the sport, only to turn around and revive it without missing a season. Immediately after the program announced it was folding, some players quickly found homes.

The clear-cut top target for other college hockey teams was sophomore goalie Clarke Saunders. UND ended up landing him and he became a key piece to UND's roster for two seasons, including the 2014 NCAA Frozen Four squad.

Saunders is still excelling in pro hockey to this day.

Who is the top target?

When Huntsville played in Grand Forks in January, the clear-cut best player on the roster was freshman forward Josh Latta, who went on to lead the team in scoring.

But Latta already had planned on transferring. He announced a month ago that his new destination will be UMass Lowell. Because Huntsville has eliminated its program, Latta should be eligible immediately for the RiverHawks, just as Saunders, Roy and Gatt were in 2012.

What is LIU doing?

Where do Huntsville's players to from here?

The first thought is LIU, which is trying to hurriedly fill a roster for 2020-21.

According to Adam Wodon of College Hockey News, LIU has already reached out to Huntsville's players.

Was told LIU already reaching out to numerous Alabama-Huntsville players -- remains to be seen if some would prefer D-III schools at this point. LIU still doesn't have a coach, mind you.

But LIU doesn't even have a coach in place yet. Is the athletic department choosing players for its head coach?

As eager as Division-I men's hockey is to add another program -- especially in New York City -- LIU has been one red flag after another thus far.

Former UND coach Brian Idalski has been recruiting his old players to join his KRS Vanke Rays pro team based in Shenzhen, China. The Vanke Rays play in the Russian-based WHL and became the first foreign team to win the title last season.

Among the players on that squad were Amy Menke, Rebekah Kolstad and Taylor Flaherty, who all suited up for Idalski at UND. Idalski's assistant coach was Max Markowitz, who also served as a student and video coach at UND.

Now, there's a report that Idalski has landed one of the top players in the world, Michelle Karvinen.

Karvinen, who is from Denmark and Finland, starred for Idalski for three seasons at UND. She served as an alternate captain as a sophomore and the captain as a junior.

SVT reports Michelle Karvinen is headed to China and the KRS Vanke Rays. Karvinen wouldn’t comment for this article, but for what it’s worth I’ve heard the same thing. https://t.co/268p38z2Y0