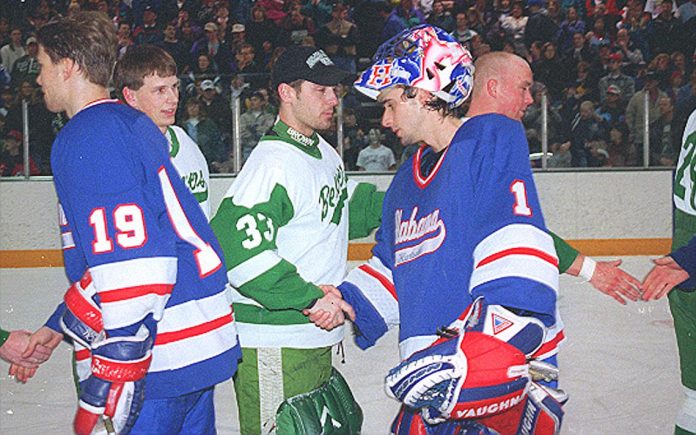 
That chant has been heard frequently at Bemidji State men’s hockey games over the years, even at those that didn’t involve Alabama Huntsville. That’s how strong the resentment was.

But hate is a strong word.

I know Beaver fans the world over are saddened by last Friday’s news that UAH is eliminating its men’s hockey program effective immediately. The two programs may have shared a bitter rivalry over the last quarter-century, but all that bad blood on the ice washes away when news like that comes down.

How could teams from opposite ends of the country separated by 1,200 miles possibly become heated rivals? Four national championship matchups in five years will do the trick.

It all began in 1994 with a showdown in the NCAA Division II finals at Huntsville. The Beavers claimed their 10th national championship after the teams split the first two games, requiring a 20-minute mini-game to decide the winner. Jason Mack netted the clinching goal in overtime.

After Bemidji State swept Mercyhurst in the 1995 finals, BSU and UAH met in three consecutive finals series. The Chargers claimed their first national title in ‘96 and their second in ‘98, with a Beaver championship sandwiched in between.

“We’ve had a great rivalry over the years,” current BSU head coach Tom Serratore said Friday. “Bemidji and Huntsville had great games in the 90s. National championship games, back and forth. It carried over into the Division I era.”

The programs rose to Division I in the late 1990s and became charter members of College Hockey America. The rivals met six times in the CHA Tournament, including once in the title game in 2005 when Bemidji State earned its first NCAA Tournament berth with a 3-0 win in Grand Rapids, Minn.

“It was a heck of a game,” Serratore said. “We just had so many great battles over the years, especially in the 90s and the first part of the new millennium.”

That 2005 CHA Tournament is also the origin of the “Who hates Huntsville?” chant, according to the UAHHockey.com blog. During a semifinal win over Niagara, a Chargers player reportedly spat on the glass in front of a group of BSU fans after a UAH goal, spawning a chant that has continued ever since.

The Beavers and Chargers were placed in the same regional for the 2010 NCAA Tournament, though first-round losses prevented a clash that would’ve had a Frozen Four berth on the line.

UAH spent three seasons as an independent following the CHA’s demise before rekindling the rivalry in the WCHA from 2013 to this past season.

Bemidji State swept all four meetings in 2019-20 to end the all-time series with a 55-32-5 edge over its southern rivals.

“It was a fun rivalry over the years,” Serratore said. “When this happens, it’s a tough day for hockey.”

Even with Alabama Huntsville gone, perhaps the chant will live on at Beaver games, though it’ll likely be uttered with a hint of sadness.

The Alabama Huntsville news, though disappointing, is not all that surprising.

UAH had briefly canceled the program once before in 2011 for similar reasons: financial concerns and lack of a conference.

However, a last-ditch effort to save the team was announced Monday evening after program benefactors spoke with UAH administrators. Program supporters will need to raise $1 million by 5 p.m. Friday, May 29, to keep Charger hockey alive.

A GoFundMe fundraiser has been created to raise half of the money. If the GoFundMe is successful, a group of donors has pledged to donate another $500,000 to meet the goal.

You have to admire the devotion UAH fans are showing the program with this effort, but to be honest, it’s a pie-in-the-sky endeavor.

Alabama Huntsville’s demise is just the latest blow to the WCHA.

The icing on the cake was last summer’s news that Huntsville and the two Alaska programs were being left behind as the WCHA’s seven other members announced their departure to form a new conference in time for the 2021-22 season.

WCHA men’s commissioner Bill Robertson told the Star Tribune that he expects both Alaska programs to play in 2020-21 after talking with school representatives Friday. Robertson is looking for schools to potentially join the league and said he hopes the WCHA can move forward as a five- or six- member conference beyond this upcoming season.

The Alaska programs, however, had already been on shaky ground even prior to the pandemic.

The teams were nearly eliminated in 2016, and massive budget cuts to the university system proposed last summer jeopardized their future once more. Those proposed cuts were eventually scaled back and the programs committed to playing through the 2020-21 season, though with the pandemic forcing budget cuts at athletic departments across the country, the future of the Alaska programs remains murky.

As it was for the Chargers, it wouldn’t be surprising if, ultimately, the COVID-19 pandemic is the final nail in the coffin for the WCHA.