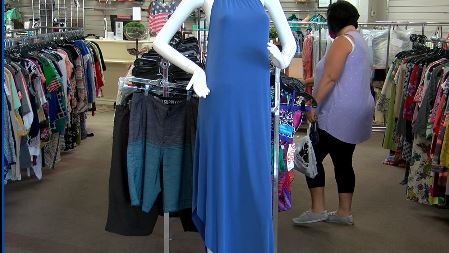 
After having to close down in April, retailers report a 17.7 percent increase in sales in May.

Stores in Morgan County are benefiting from the sales increase.

The owner of Better than Before in Decatur told WAAY 31 she was happy to see so many loyal and new customers ready to shop once they re-opened to the public.

She said she hopes things stay this way so the store is able to fully recover from when they had to be closed for more than a month.

"Initially at that first point in time when we first opened we saw a good bit of traffic, it has kind of leveled off now," Sonya Nix, the owner of Better than Before, said.

The resale store was closed for five weeks because of coronavirus. One customer told WAAY 31 she’s made repeated trips to the reopened store.

"I would say at least five. I actually drive from Huntsville to come here just because I like the atmosphere and the people that work here so we're very excited it's opened back up," Lisa Jones, a customer, said.

Nix said as a small business owner she’s thrilled so many of her customers returned. She says the increase in sales helps make up for the time they were closed.

"Ecstatic because we had to go for such a long time with no revenue so we have a lot of lost ground to make up," she said.

She said even though they've re-opened they're still keeping customer safety as a top priority.

"I hope we maintain that steady flow, we're working really hard," she said.

Nix said when they were closed they did begin to operate an online store through social media which helped them bring in a little business.

She said they're continuing to operate that so they have multiple ways to bring revenue into the store.