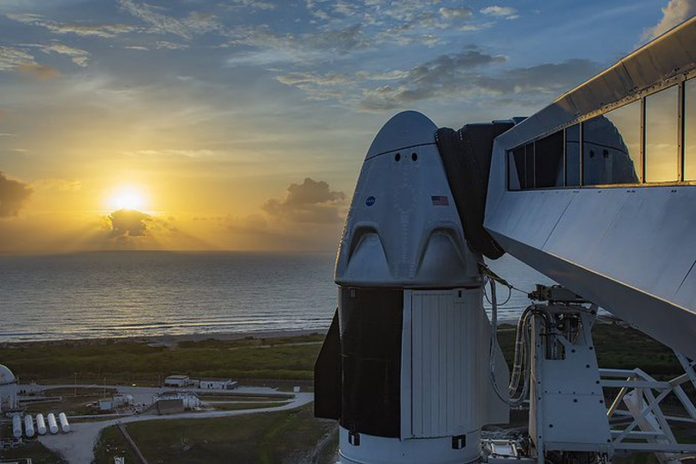 
Alabama’s Rocket City is cheering for SpaceX today as it prepares to launch astronauts on an American rocket from American soil for the first time since 2011.

NASA astronauts Robert Behnken and Douglas Hurley were scheduled to launch to the International Space Station at 3:33 p.m. CDT from Launch Complex 39A at the Kennedy Space Center in Florida.

This morning, ground controllers were watching Tropical Storm Bertha developing off the South Carolina coast “near the Falcon 9 rocket’s ground track as it would fly northeast from the Kennedy Space Center to align with the orbit of the International Space Station.” A launch decision will be made after a 9 a.m. CDT meeting.

The space opportunities arising from this launch and others to follow “will undoubtedly bring about many future collaborations, and each advancement will bring new technologies to the global space community,” Battle said. “NASA, as the space giant, will continue its leadership role in defining the next evolution of space exploration.”

Segovia said Marshall engineers will be monitoring the launch from the Huntsville Operations Support Center (HOSC) at Marshall along with NASA centers in Houston and at the Florida launch site.

Marshall Center Director Jody Singer said today that she is proud of the partnership between the space agency and SpaceX and added, “I know our Marshall team will be watching with great excitement, as we support the launch from our Huntsville Operations Support Center,” Singer said.

The mission "enables NASA to continue the important research and technology investigations taking place onboard the station, benefiting people on Earth while laying the groundwork for future exploration of the Moon and Mars with the Artemis program,” Singer said.

Marshall is leading development of the Space Launch System rocket that will take astronauts to the Moon and the lander that will put them on the surface in the Artemis program, named for the Roman goddess who was the twin sister of Apollo. One of the three leading candidates to build that lander is Dynetics, Inc., of Huntsville.

From 2011 when the Space Shuttle stopped flying until today, Behnken and Hurley could have reached the station only aboard a Russian Soyuz rocket at current cost of almost $80 million a seat. That was the only way to get there. President Obama’s administration created the Commercial Crew program to support commercial space and provide a way for America to reach the space station after the shuttle program ended. NASA turned its primary launch focus then to reaching the Moon and Mars.

SpaceX, the California company owned by entrepreneur and Tesla motors founder Elon Musk, is the first attempt to launch astronauts in its Crew Dragon spacecraft lifted by a Falcon 9 rocket. This will be the first crewed launch of the Dragon and an opportunity to test its systems in orbit. It will also validate SpaceX’s crew transportation system from rocket to ground operations. The company has already sent an uncrewed Dragon to the station in an earlier test flight.

Meanwhile, Boeing is also preparing a capsule to launch astronauts to the station, giving NASA and America two ways to get into space, and a lot of Boeing’s space work is done in Huntsville.