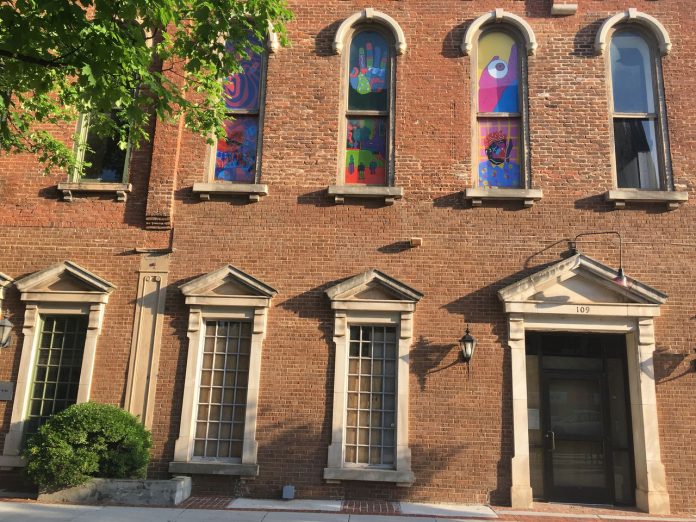 
The trippy paintings appeared in the windows maybe 15 months ago. Up there, on the second-floor at 109 North Side Square. Various imagery involving hands and heads. A two-headed cat. Saturn. Far out, Peter Max-type stuff.

Soon, curious locals will finally get a chance to see what’s been going on inside at 109 North Side. The address has many past lives, including the disco Club Rush and restaurant/lounge Jazz Factory.

The cavernous space is set to become BeeZr Gastropub + Social Exchange. The new venture is actually a trident of sub-businesses: Chandler's Ford Brewing, Champagne Taco Kitchen. According to co-owner Ron Jewell, BeeZr will open this summer. An exact opening date has yet to be finalized.

Chandler's Ford Brewing will focus on heavily hopped India Pale Ales, high gravity barrel aged stuff, lagers, mixed fermentation beers, etc. "A significant differentiator is the ability to serve straight from the tanks," Jewell says, "thus eliminating degradation and oxygen exposure, resulting in the freshest and most flavorful beer in the region. Fresher beer is better beer." Expect 15 or so different beers to be on tap there at any given time.

The business name was derived from "beezer," British slang for "excellent." The anglophile references don't stop there. Chandler's Ford is a neighborhood in Hampshire, where Jewell's family lived in his tweens.

Jewell's vocational background is in aerospace and engineering software and hardware. Growing up, he worked in the restaurant and bar business, including during college at an Auburn joint called The Happy Hunter. About five years ago, he started getting into home brewing. A year or two later, he decided he wanted to enter Huntsville fertile craft beer scene, already home to around 10 or so breweries.

"What I like is the fact it doesn't seem like it's saturated," Jewell says. "We've got so many beer lovers in this area." To research what they'd do with Chandler's Ford Brewing, Jewell took road trips to check out breweries in Birmingham, Miami, Asheville, Nashville and beyond.

Doug Tibbs has been tabbed to be Chandler's Ford's head brewer. Over the years, Tibbs has worked at local breweries including Blue Pants, Straight to Ale and Rocket Republic. For Chandler's Ford, Tibbs says, "In all we have 20 to 25 potential fermentation vessels, any of which will very rarely see the same recipe as another tank."

Northside Coffee Roasters started up in online sales, in 2019. NCR's Keenan Tipton says, "moving all operations to our new downtown location will allow us to vastly broaden our on-line product line." Look for specialty coffee favorites including espresso, lattes, cappuccinos and cold brew.

Jewell says BeeZr will employ a staff of about 25, including an as yet to be determined executive chef. A viable small business, particularly in the food/beverage industry, is tricky enough when the focus is narrow. So why open up with a three-pronged concept like BeeZr, and complicate things further?

"It was really more of an acknowledgement of the primary two entities being essentially independent operations," Jewell says. "The brewery operations are independent from the kitchen operations. Customers walk in and they will see one menu for food and beer and coffee and champagne and all our beverage offerings. So it's not like you are walking into a food court."

In addition to the above three in-house ventures, BeeZr will serve as commissary for vegan food truck Hippea Camper. According to operator Garrett Hardee, "Hippea Camper specializes in comfort foods familiar to our history and customers, and we present them in a way that excites vegans and non-vegans alike."

Tipton says collabos between Northside Coffee Roasters, Chandler’s Ford Brewery, Champagne Taco Kitchen and Hippea Camper will be an integral part of BeeZr. There are efficiency benefits too. For example, beer and coffee share a number of overlapping beverage constructs. With gourmet eatery Domaine South and English style pub The Poppy already open on North Side, the block has the potential for nightcrawling symbiosis.

The BeeZr building dates back to the early 1900s, Jewell says. When I first visited the site last year, a gigantic mirrorball sat inert downstairs, and an upstairs office desk contained a stack of old IDs, harkening back to Club Rush. The space contains at least three levels. When BeeZr opens it will focus on the first floor main bar and seating area, a second floor mezzanine, private event room and an outdoor area. “This building has a great layout for expanding upstairs,” Jewell says. “We will probably open that for event space in the second phase. Who knows what the future holds? We have a large roof as well.” Jewell says he’s indicated an intent to host live entertainment at BeeZr on various licensing applications.

Back when they were looking at possible locations, Jewell and his business partner knew they wanted to be downtown. Once he got a look at 109 North Side's vintage design and malleable shell, he knew this was the place. " I think we're in a great spot at a great time," Jewell says, noting the proximity of planned hotels.

They'd hoped to have what ended up being BeeZr open last year. Alas, big wheels grind slowly. Jewell says the coronavirus pandemic didn't really impact progress though, since the large space allows for socially distanced work inside. They will start with a capacity of 155.

Almost two years ago now, to help “get the rumor mill going” about what was going on inside 109 North Side Street, Jewell had his daughter, a college student majoring in design, paint those aforementioned psychedelic canvases for the front upper windows. He even had the canvases backlit. Now, all the planning, building and waiting is about to be over.