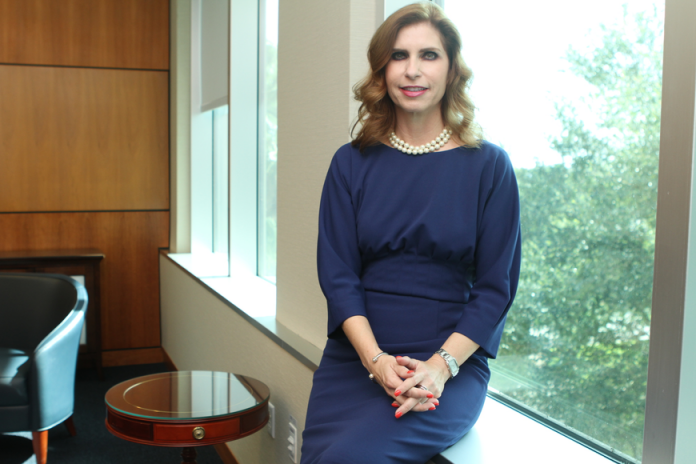 
With humility and a burning desire to outwork competitors, the new leader of a storied insurance firm faces unique situation: prosper through a pandemic.

A word that comes up constantly when people talk about Christina “Cina” Welch, recently named president and CEO of FCCI Insurance Group, is preparation. Most times, over-preparation.

Like the times Welch, an attorney who joined Lakewood Ranch-based FCCI in 1998, in the legal department, oversaw a littler brigade road clean crew up through the University of Florida alumni Gator Club. Tasked with cleaning Osprey Avenue, outside downtown Sarasota, Welch would get there first, clipboard in tow to divvy up assignments, and set up a sign-in table with donuts and orange juice.

More preparation: Her performances in FCCI’s annual skits held around Halloween. Executives of the company, nearing $1 billion in annual revenue, dress up and cut loose in front of hundreds of associates, with themed shows. One year Welch was Belle from "Beauty and the Beast." Another year? Tina Turner.

“She sang 'Proud Mary' and put on her dancing shoes,” former FCCI CEO and current board member G.W. Jacobs says. “She spent a lot of time practicing her songs. Whenever she does something, she always does it 100%.”

Welch will have to be all-in yet again in her latest of several career accessions at FCCI, one of the most established commercial property and casualty insurance firms in the region. With some 850 employees, more than 16,000 policyholders and $930.1 million in revenue in 2019, Welch was named to the top spot at the firm June 29. The promotion marks a career pinnacle for Welch, 50, who joined FCCI seeking experience she could leverage for a job at a law firm and maybe chase the partner track. “I thought I would be here for six months or a year,” she says, “but I fell in love with FCCI.”

Welch replaces former CEO Craig Johnson, fired May 12 after being charged in an alleged battery on two Sarasota police officers during an incident at a Sarasota restaurant. The allegations against Johnson, named CEO in 2011 and a board member, is a rare stain on FCCI, known in the industry for its high ethics and “do what we say we’ll do” ethos. The company was founded in 1959, initially as the Florida Contractors and Construction Industries Self-Insurance Fund. It started with $3,776 in assets, collecting premiums for worker’s compensation. If there wasn’t enough money in the pool when receiving a claim, according the firm’s 60th anniversary report, the members would pony up to pay it.

‘We don’t need to deviate from what we’ve been doing. There’s no need for a big change in our business operation or our business model.' Cina Welch, FCCI

The hiring of Welch — staying inside the organization instead of finding someone outside FCCI to replace Johnson — has been well received both inside and outside the company. FCCI Chairman Jack Cox says several employees reached out to him and praised the firm for promoting Welch. FCCI has been recognized multiple times in insurance industry and general best place to work surveys and boasts high-employee retention rates, something Cox and the board were cognizant of in the CEO search. “There’s not going to be a learning curve on our culture with Cina,” Cox says, “which is really important.”

Longtime Sarasota insurance executive Keith Mercier, now Florida West Coast President of CBIZ, has worked with and done business for FCCI for years and knows Welch. Mercier, who like Cox, also knows Welch from working with her on the board of the Argus Foundation, a Sarasota pro-business group, says her work ethic is unmatched. “I try to surround myself with people I look up to and respect as peers,” Mercier says, “and Cina is definitely one of those people.”

For a company so immersed in protecting and mitigating people, businesses and things against risk, Christina "Cina" Welch has quite the adventurous vacation side.

The irony has not been lost on many of Welch’s senior-level colleagues at FCCI Insurance Group, where Welch was recently promoted to CEO and president. “It comes up a lot,” FCCI treasurer and CFO Chris Shoucair says, recalling one time Welch told him about her bobsled adventures and that it was much faster, and scarier, then she thought it would be.

Welch’s competitive fire merged with a newfound global, unique experience seeking side around the time the now 50-year-old turned 35. “I thought I was old and wondered if I was so old that I couldn’t learn any new stuff,” Welch says. “So I challenged myself.”

Mission accomplished. Her list of trips and experiences over the past 15 years include:

• Taking care of cheetahs and lions at an endangered species center, in South Africa, including releasing one cat back into the wild after rehab;

• Volunteering to teach English and do building projects at a rural school in Cambodia;

• Cage diving with Great White sharks at the Isle of Guadalupe.

She recently traveled to Vietnam, where she went down into the largest cave in the world, the Son Doong Cave, billed by one travel guide company as one of the worlds “top bucket list adventures.”

Many times on her trips, she’s one of the few women, one of few Americans and one of the only ones who speaks English. That just motivates Welch more to come through on the other side with a life-altering perspective on other cultures.

That was especially true at the caves in Vietnam, which she likened to a huge science experiment. “It rained day and night. There were bats and leeches, and sometimes it was so dark you couldn’t see,” Welch says. “It was the hardest thing I’ve ever done — and I’ve done a lot of things.”

A Sarasota native, Welch’s preparation-for-success theme started at a young age. She swam for the Sarasota Sharks swim team, played tennis and even attended the famed Space Camp in Huntsville, Ala., for two summers. Later on she prepared for serious athletic feats, completing the Florida Ironman and a 100-mile road race around Lake Tahoe.

Welch’s fellow Sarasota High School classmate Todd Morton, owner of Morton’s Gourmet Market in Sarasota, recalls a studious teenager with high integrity and an adventurous spirit. “She was always one of the smartest people in the room,” Morton says, thoughts echoed by FCCI’s Jacobs, a fellow lawyer who calls Welch the “smartest attorney I’ve ever met.”

Smart, and like the company she’s spent the bulk of her adult life at, humble and unpretentious. Several who know Welch, who drives a Toyota 4Runner, say she’s motivated for her love of friends, family, animals and adventure — not material trappings.

Welch’s mom, Myrna, says in addition to humility and preparation, the younger Welch’s determination and commitment to a task “was always off the charts.”

“I’m not really sure she needed a mother, past being fed and getting on her two feet,” Myrna adds. “After that, she was self-sufficient.”

Growing up is also where the younger Welch got her nickname, Cina, so widely used it’s basically her name today, not Christina. The name stems from her brother, who, when he was younger couldn’t pronounce the word Christina but he could say Cina. It stuck.

From her parents’ multiple examples, Welch learned the value of philanthropy. Her father, John, a retired doctor, and her mother have supported myriad causes in Sarasota, including helping launch the Sarasota Film Festival and other arts events and projects. Community support and philanthropy is a big focus at FCCI, one Welch says she intends to emphasize as CEO.

The stability Welch learned from her parents, and in coming home after UF and law school at Stetson, was one reason the board chose Welch over several other candidates. The company, despite several challenges, particularly in worker’s compensation rates and commercial auto lines, posted a record year in direct written premiums in 2019, with $843.9 million. It also posted a profit of $80.6 million last year. “We don’t need to deviate from what we’ve been doing,” Welch says. “There’s no need for a big change in our business operation or our business model.”

Welch, of course, wasn’t chosen just for her stability, even in the pandemic. She has a long list of accomplishments at the company. The list includes developing the company’s Data Security Incident Response and Information Security programs; building an Enterprise Risk Management program; managing FCCI’s Business Continuity Management program, including the corporate COVID-19 response; and leading the company’s geographic expansion efforts, with the company now doing business in 20 states. At FCCI, Welch has been assistant vice president of claims, where she oversaw 90 employees, chief risk and compliance officer, and, most recently, executive vice president, general counsel, and chief audit and compliance officer.

Another significant accomplishment — and telling moment in Welch’s career — happened in 1998, her first year at the firm, when Jacobs gave her a big task: determine what the company’s policyholders’ ownership rights would be if and when the firm changed its ownership structure to a mutual insurance holding company. “I thought: ‘Who am I that he’s giving me this? I know nothing about this,’” Welch says she recalled at the time. “It was a big deal, as I had only been part of the company for a couple of months.”

Welch put in her typical preparation and the project was a success, Her memo, she says, was “very well received by the board of directors.”

That project boosted Welch’s career. It also was the start of a friendship and mentorship with Jacobs — a beloved leader at FCCI who received a rousing standing ovation at the firm’s 60th anniversary party in 2019. “He’s so

smart and genuine,” Welch says. “I’ve never met anyone who hasn’t been inspired by being in his presence.”

One of Jacob’s biggest mentoring tips to Welch was to find ways to get out of being only in FCCI’s legal department. “I told her, 'You’re No. 2, but if you ever want to be No. 1 here,'” Jacobs says, “'you’re going to have to manage something.'”

Once she started managing teams at FCCI, Welch honed her leadership skills, inspired by something she read in a magazine about thinking about leadership like Swiss cheese. “You need to know your weaknesses and your strengths,” she says. “And you need to know where all your holes are.”

Lisa Conley, an assistant vice president and associate general counsel at FCCI who has worked under and with Welch for more than a decade, agrees on the collaboration point. She adds Welch has the right mix of empathy and decisiveness to get the most out of teams, again, citing her boss’s penchant for doing her research, never being outworked and a healthy self-awareness. “She’s’ really perceptive,” Conley says.

One challenge Welch is sure to face in her new role, Shoucair says, is classic corner office: dealing with dueling interests. Shoucair says: “She will have to break some ties.”

Welch says her one key to building a high-performing team is to over-communicate, a lesson she’s utilized many times at FCCI. “We communicate a lot here — it’s something I take really seriously,” Welch says.

That approach came in handy during the coronavirus pandemic. Although FCCI remains on target for a strong 2020, despite the pandemic-led downturn, COVID-19 has had a big impact on the FCCI circle of clients, vendors and employees. And unlike a hurricane or other disaster, difficulties preparing for a pandemic that can run seemingly indefinitely is a big pain point for Welch — and her biggest anxiety in her new role.

“With the uncertainty of coronavirus, I do worry about our people and all their families,” Welch says. “COVID-19 is obviously a game changer. We just don’t know how much of a game changer.”