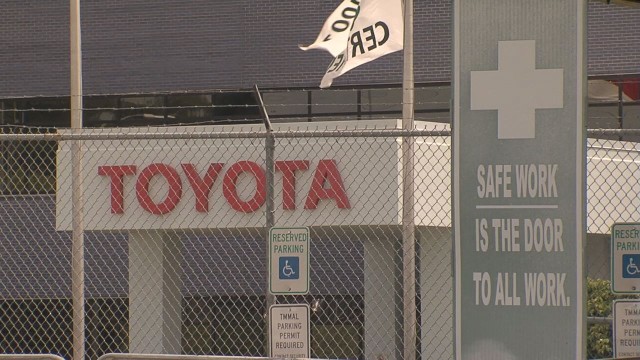 The week of May 11, 1,400 employees will be returning to a whole new working culture at the newly safety-revamped Toyota-Alabama plant in North Huntsville.

The company has been working to comply with federal safety guidelines and local and state ordinances.

But before they open up, they invited various local officials, along with WAAY 31, to take a tour inside to get a look at their "new normal."

At Toyota-Alabama, safe work is part of their motto. Now, safety signage is awaiting the returning 1,400 employees.

When employees return back to work, they'll check into work stations. They'll scan their questionnaire about symptoms. Then, they'll get a temperature check. If they're showing symptoms, they'll move off and talk to medical staff and get tested. If they're good to go, they'll receive a mask and report to work.

On the inside of the plant, WAAY 31 joined company and Madison County officials with masks on, which is a requirement of all employees.

In the dining area, Plexiglas shields are placed as barriers at tables and food areas to provide added protection against the spread of coronavirus. There are even staggered eating schedules to keep people spread apart.

Toyota used 3D printers and machines to crank out well over 12,000 face shields for local healthcare providers on the frontlines and their own returning workers. They even made respirator masks for local schools, and more can be made at a moment's notice.

“This is kind of the gold standard of the new normal and what we have seen time and time again is that Toyota has led the charge and how we set up the new industries of tomorrow,” said Huntsville Mayor Tommy Battle.

Partitioned Plexiglas shields are draped down to protect employees from each other on the assemble line. It made you feel like you had to try extra hard to communicate with each other, a challenge Battle quickly picked up on.

"We're all going to have to communicate a little bit different," he said.

"Mayor, you're 100% right. Just when we greeted each other this morning, the natural instinct is to shake hands, 'how do you do?' Now, we all have to change the way we think," David Finch, the Toyota-Alabama president, said.

That's something Finch said will be part of immediate training.

In a whole new working environment, leaders saw firsthand that the best protection is in place even if the worst is still ahead.

"I think there's less of an opportunity for an outbreak because of what they put in place. They thought through almost every aspect of what they have to do on the line to continue to build engines, but they've also put the pieces in place to help separate their employees and keep them safe," Madison Mayor Paul Finley said.

One other change awaiting Toyota-Alabama employees when they return to work is staggered schedules. Finch says those changes will help accommodate the ease of entry into the plant and maintain social distancing.