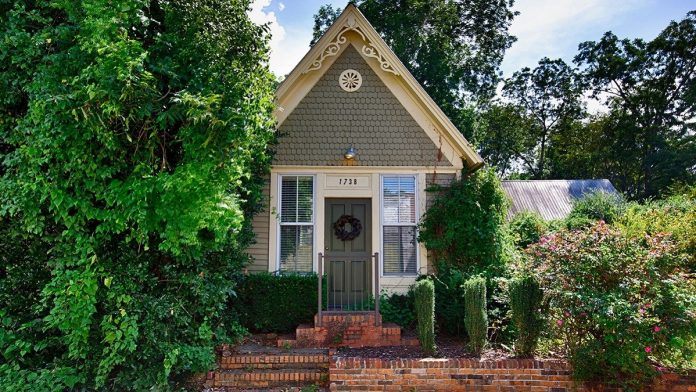 
In the tiny town of New Market, 15 miles from Huntsville, the past has come to life again – only this time, the buildings have been repurposed, honoring the past while celebrating the present. Thanks to an enterprising couple, Whitney and Bethany Dean, the town is, if not bustling, then at least filled with visitors staying in the formerly boarded-up buildings that line the main thoroughfare near the Flint River.

In 2013, when the Deans – he’s from Huntsville and she’s from Madison County – first looked at Winchester Manor, they fell in love with the historic home. “Every corner we turned, we found something more interesting,” Whitney said. “And the property was next to the downtown area, which we thought was charming.”

The home built in 1910 came with a barn, a cottage and a grove of trees. Working together as professional photographers, they offered the whole package, literally, to couples who wanted to get married in the beautiful setting. Following an outside wedding in the grove, the wedding party would move to the barn for a reception, then the couple would honeymoon in the cottage, with its 100-year-old herringbone-patterned floors and shiplap walls.

“The honeymoon cottage led us to think we could do more,” said Whitney. One of his friends asked if he’d heard of Airbnb. “I said, ‘I doubt that’ll work, but why not try?’ It was an immediate fire we couldn’t put out.” Before they knew it, “we needed more spots to put people.”

The couple already had practice flipping houses and owning rental properties. They started buying nearby homes and buildings in various states of disrepair and ruin, lovingly renovating and listing them with Airbnb and VRBO. “There’s always a way,” Whitney said. “If the structure is there, it can be saved.”

They started with The Cottage, the inspiration for their venture, which was named the most popular Airbnb listing in Alabama in 2018; and The Loft, the upstairs part of the barn behind the Deans’ home, which has two bedrooms, 14-foot ceilings and all-white décor.

Among the other buildings they’ve acquired is The Bank, built in 1926 and now divided into two distinct spaces; The Vault in the front and The Teller’s Quarters in the back. The Vault includes the original bank vault, now used as a dining room that’s like a “reverb chamber” thanks to its 36-inch-thick walls. A former flat skylight is now a dramatic cupola that lets in natural light. There’s a full kitchen and laundry room. The Teller’s Quarters is like a cozy studio apartment with a dramatically high ceiling and walls that look like abstract paintings courtesy of 100-year-old roof leaks and layers of paint.

At The Greenhouse, a former florist’s shop housed in a three-bedroom, two-bath home with a tin roof, the Deans scraped through several layers of wallpaper to reveal the wood on the ceiling. The Paint Shop was just that, a nondescript building with one crumbling brick wall, before the Deans bought and repaired it. Now it’s a comfy, wheelchair-accessible studio with a wall of old bricks that still bear scribbled signatures from decades past. Framed paint brushes on the wall hint at the building’s original purpose.

“Bethany’s a genius,” Whitney said of his wife’s decorating skills. “We made the headboard by hand. We care about what we’re trying to do.”

Each space is designed to feel like a luxurious getaway, Whitney said. When guests walk into any of the Deans’ properties, they’re greeted with relaxing, spa-like music to let them know that “they’re somewhere interesting, and it feels good to be here,” he said.

Down the street, the Deans purchased a 1970s-era recording studio that does double duty as its original purpose as well as housing The Studio, yet another rentable space. When they bought that building, everything was pink and green and covered with paneling, said Whitney, who spent hours on his hands and knees staining the concrete floor.

And he’s not just a rock star at renovating buildings and being a good host. Whitney sings in a folk-pop duo, The Sweeplings. He uses the studio space for his band and for work as a producer and engineer for other artists.

“We’re millennial-generation people, and we do a million things,” he said. “We work by and for ourselves. My wife’s love language is ‘Look what I did.’ I’m the loose-cannon creative, and she’s the business person.”

Next door to the studio sits The Spartan “Glamper,” the most unusual space of all. The vintage camper is a 1949 Spartan Mansion built out of WWII airplane parts. Completely restored, it has new floors and a new electrical system, but “everything else is old,” said Whitney. The camper now has central heat and air, “so it’s not as mobile as it once was,” he said. “It’s like a little house now.”

The couple have started renovating the building next door to the old bank. It will become The Grocery, with two bedrooms, sometime later this year – but that project is on hold because they recently became parents. Their son, Lorin James Dean, was born March 18.

Most of their guests come from within an eight-hour radius of Huntsville. “People are looking for an experience,” Whitney said. “They don’t want to stay in a hotel. They want to eat dinner in a bank vault, stay in a weird downtown, in a place where you can get away but not go too far away from a major city. It’s just 25 minutes from here to a spaceship. They can stay here, eat at a meat-and-three and have a Mayberry experience in this little bubble of time.”

Want to read more good news about Alabama? Sign up for the This is Alabama newsletter here.

This story was first published by AL.com.