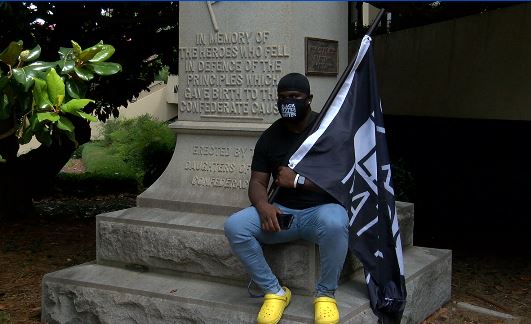 Protesters gathered at the Confederate statue ahead of Thursday's Huntsville City Council meeting where some planned to speak Thursday night.

They want to put pressure on all local leaders to remove the Confederate statue outside of the Madison County Courthouse now.

The Madison County Commission planned to ask the state on Thursday if it could move the monument, but the meeting was cancelled.

The statue is on county-owned land in Huntsville, but protesters are now asking for the city's help to either move the monument themselves or pressure the commission to do so now rather than waiting for the state's permission.

"We believe the Madison County Commission can and should move the monument," Frederick Whitlow, a local organizer, said.

Whitlow said asking for the state's permission instead of taking immediate action is injust.

"Dr. King himself, he said immoral laws should be broken ...," he said.

"The monument has been up for so long, and even since June 1st it's still up just proves that, Huntsville is not really the progressive city it proclaims itself to be and it's really just a facade that's like covering up a city with a lot of racist history," John Brown, said.

Whitlow said he hopes bringing concerns to the city council will help speed up the removal of the statue.