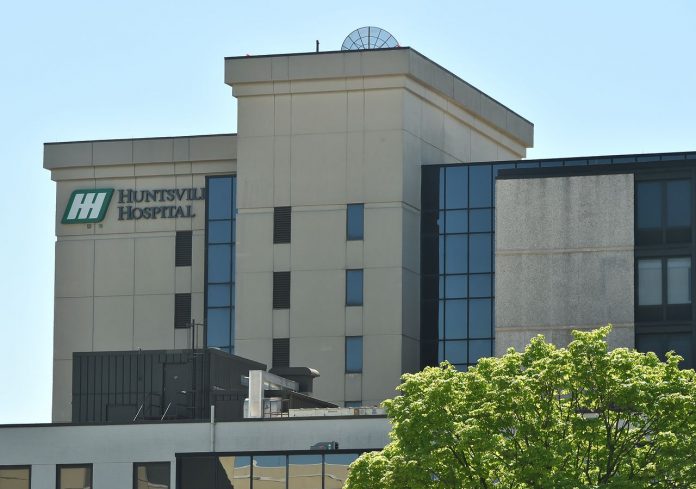 Spillers said those hospitals were, “all asking to transfer patients to Huntsville Hospital because the hospitals in their area were full. They felt like they could not take any more COVID patients. We were unable to accept those patients because we were dealing with the patients we have here in north Alabama.”

Those requests are an indication of the strain hospitals are beginning to feel from the surge of patients needing hospitalization. Mississippi and Tennessee both hit high marks for COVID-19 hospitalizations last week, according to public health data in those states.

At the same time, Huntsville Hospital – the second-largest hospital in the state – is facing its own pressures. There were 99 patients Monday morning who had tested positive for COVID-19, plus two more at the hospital’s nearby Women’s & Children’s hospital. That includes a 15-month-old patient that Spillers said has a good prognosis.

Across the Huntsville Hospital System in north Alabama, there were another 96 patients. Huntsville’s Crestwood Medical Center had 16 patients on Monday as well.

The coronavirus hospitalization numbers at Huntsville Hospital and throughout its healthcare system have flattened out over the past two weeks, though still remain at or near their high marks for the pandemic.

A change could be coming soon, though, because Spillers said hospitalizations were on the increase in the Shoals area in northwest Alabama. At Helen Keller Hospital – a part of the Huntsville Hospital System – there were 31 COVID-19 patients on Monday. At North Alabama Medical Center in Florence, which is not part of the Huntsville system, Spillers said there was a similar number of inpatients.

The issue of hospital resources also goes beyond the coronavirus. Spillers said Huntsville Hospital had a record 104 patients on ventilators at one time last week, though only about 25 percent of those patients were positive for COVID-19. And the hospital’s neo-natal intensive care unit had 84 babies, the most it’s ever had.

“They weren’t emergency transports,” Spillers said of the requests for help. “They were just trying to offload some of their stable patients to free up space for other patients.”

Meanwhile, Spillers said that the hospital’s in-house testing capacity was reduced by 600 tests this week because of a nationwide shortage in testing supplies. He described the testing shortfall as manageable for now with the hope that supplies will be more readily available for next week.