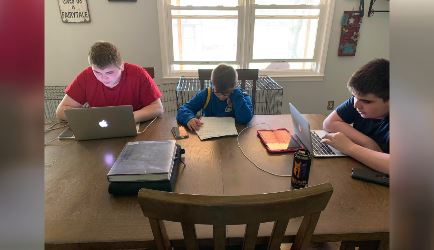 
Parents across North Alabama want more details on the virtual programs schools plan to use before sending kids back to class.

We learned both Huntsville and Athens City Schools are using the state’s program run by a group called SchoolsPLP, but parents and districts are waiting to see what it looks like.

Huntsville City Schools is giving parents only seven more days to decide whether or not to register their child in virtual school, but without seeing how the program works, they say it's difficult making that decision.

"I just don't know how organized the virtual part is. I really don't and not seeing the curriculum and not knowing where to go, that does make it hard," said parent, Cleo Thompson.

Cleo Thompson has a 9th-grader in Huntsville City Schools and says without seeing the virtual program for this Fall, she is already thinking of a back-up plan.

"We will just have to do the best that we can. I've already been searching for tutors," said Thompson.

She’s concerned about how well children will adjust to the virtual program. It’s very different than what schools used when the state closed traditional classrooms in March.

"That's scary to me because we are really big on her grades and she is too. Especially being in high school, these grades are going to carry her into college," said parent, Cleo Thompson.

Thompson isn't the only one with concerns.

"By not knowing what's going on either next month or five months down the road, there are still a lot of questions that should be answered," said parent, Pamela Baldo.

Pamela Baldo has children in Athens City Schools and says when they did virtual learning at the end of last school year, her autistic son had a difficult time with it.

"His brothers were done with ten, twenty minutes. It was almost four to five hours every day and just trying to find better ways to keep him on task," said Baldo.

If students have to transition to virtual school next year due to an outbreak, Baldo wants to know what accommodations districts will make for those kids who struggle with online learning.

Both parents say they want to see the virtual program sooner rather than later.

"I've waited, trying to decide because I don't want to make the wrong move," said Thompson.

Districts want to see the program too because the state still hasn’t released it. Once the state department of education releases the curriculum, school districts choosing to use it must approve it.

Huntsville City Schools is supposed to receive the virtual program from the state this week. The district plans on a vote this Thursday.