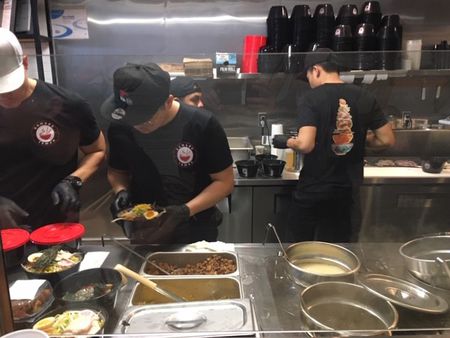 A line of customers out the front door at Kamado Ramen is a common sight. The restaurant opened early January at the Stovehouse food garden in Huntsville. As the name suggests, Kamado specializes in ramen, the Japanese-via-Chinese noodle soup, that in the Instagram era has also become hipster bait.

Barely a month after opening, the restaurant is already working towards a second location. Kamado Ramen is building out at MidCity, the expansive multi-use development at 5901 University Drive, on the former Madison Square mall grounds. That’s a 10 minute or so drive from Stovehouse’s 3414 Governors Drive address.

According to Kamado owner Jim Xue, “Kamado at MidCity will have a few more items for appetizers and seasonal ramen specials, such as shishito pepper, yakitori and citrus chicken.”

Xue says MidCity pricing will be the same as at Stovehouse, where ramen bowls run about $11 to $13 and apps around $5. The décor will also be similar, with a stripped down urban vibe. Kamado Ramen will seat around 80 at MidCity, a big jump from Stovehouse’s cozy, 10-seat confines – although there’s plenty of seating at Stovehouse’s communal dining area a couple doors down.

Neighbors on the same University Drive-facing, five-unit MidCity building, which broke ground July 2019, will include: another newly announced project, ceramic painting studio Color Me Mine, and the upcoming Walburgers franchise. They’ll be located across Mid City Drive from outdoors retailer REI and High Point Climbing & Fitness.

Headquartered in Los Angeles, Color Me Mine was founded in 1991 and operates studios in 26 states, with around 140 worldwide locations. Cost for one of their paint-your-own creations is around $15 to $35 per customer, depending on package.

Kamado Ramen, Kung Fu Teas and Color Me Mine are expected to open this summer at MidCity.

“We’re curating the master plan with tenants, concepts, and businesses that maximizes how many times someone visits the district, and how long they spend time there,” says RCP project coordinator Nadia Niakossary. “We know that building this community is important for tenants to feel like they’re part of the bigger picture and success follows.”

The plan is for more national and regional concepts in MidCity’s front section, to complement the University Drive/Hwy. 72 retail-mix. “As we work our way into the dense center of the district,” Niakossary says, “the buildings become taller and the concepts become more local and urban, with five- and six-story apartment and office buildings with restaurants, fitness and retail shops on the first level.”

Construction of an 8,000-capacity amphitheater on the southwest portion of Madison Square’s former grounds, as part of a new city park there, is expected to begin this year and open for concerts 2022.