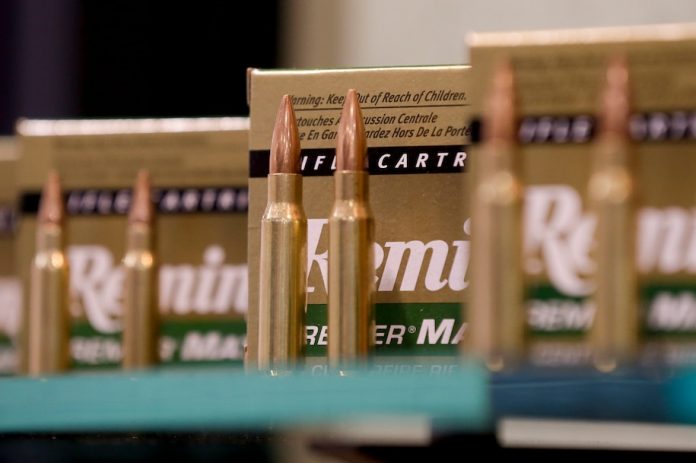 
Remington Arms, the nation’s oldest gunmaker, declared bankruptcy late Monday for the second time in as many years at a time when U.S. firearms sales are soaring.

Founded in 1816, the privately held maker of rifles, pistols, shotguns and ammunition listed assets of $100 million to $500 million, according to its filing in U.S. Bankruptcy Court in the Northern District of Alabama. It put its liabilities in the same range, and said it had from 1,000 to 5,000 creditors.

It said it owes its two largest creditors — munitions company St. Marks Powder and Eco-Bat Indiana, a lead producer and recycler — $3.5 million combined. It also lists the states of Alabama, Arkansas and Missouri, and the city of Huntsville, Ala., as creditors with undetermined claims after taking development incentives in each jurisdiction.

“They’re in financial straits. They’ve got one foot in the grave and one foot on a banana peel," said Richard Barber, a conservator of Remington internal records. His son was killed in 2000 by a misfiring Remington rifle, and he’s spent the past 20 years gathering millions of pages of company documents on its product designs and finances.

The Huntsville, Ala.-based manufacturer is trying to find a buyer after negotiations with the Navajo Nation unraveled over financing questions earlier this month. Navajo Nation Council Delegate Jamie Henio pulled his name off legislation to back to the purchase and the proposal did not find more backers in the Nation’s government.

The Nation had been prepared to spend more than $300 million to complete the sale, intent on moving Remington’s manufacturing facilities to its territory in parts of Arizona, Utah and New Mexico, for a type of jobs program. Navajo lawmakers had also made a run at the company in 2018, during its last bankruptcy filing. Former Navajo Nation Council Speaker LoRenzo Bates said the Nation had been prepared to pay as much as $525 million for the Huntsville-based company.

Remington was founded in 1816 in Ilion, N.Y., by an amateur gunsmith and marksman whose peers were so enamored with his handiwork that they commissioned their own rifles. The company was sold to DuPont in 1933, which held it until 1993, when it sold to a group of high-level executives. Remington has changed hands two more times since then.

JP Morgan Chase and Franklin Advisors took ownership of the company in exchange for $775 million in debt during its 2018 bankruptcy, but according to court documents, neither firm is among Remington’s 40 largest debtors.

The bankruptcy filing comes as firearms purchases are skyrocketing in the face of months of pandemic-fueled uncertainty and weeks of civil unrest in cities throughout the country. From March to June, sales jumped 30 percent, about 3 million firearms, according to a Brookings Institution review of federal background check data.

Nearly half of those additional sales occurred in June, after several days of protests sparked by George Floyd’s killing in police custody. Researchers wrote the spike differed from previous gun-buying binges because it was not driven by fear of pending restrictions but rather by anxiety and unease over the ongoing crises.

But consumers have gravitated to other brands. When gun purchases surge because of social and political anxiety, consumers tend to gravitate toward hand guns and semiautomatic rifles, where Remington established itself as a leader in shotguns and hunting rifles.

Guns are also notoriously hard to innovate. They’re meant to last generations and often become collectors items or heirlooms. If a gun owner is pleased with the performance of his weapon, it could be a generation before there’s a need to replace it.

“Eventually, you have a shotgun shell and you’re going to shoot it from a shoulder-position pump-action shotgun. You can only change the configuration so many times before you’re just offering embellishments,” said Greg Danas, a leading firearms and ballistics expert. “At some point, the gun of 1970 can do the same thing as the firearm of 2020.”

Remington’s long guns and shotguns have also been a source of liability that has dogged the company for decades. Its 700 series bolt-action rifles and certain models of shotgun were found to have design defects that caused them to sometimes fire without a trigger pull. That’s led to dozens product liability of lawsuits, many of which the company settled.

Remington also fell under intense criticism after the 2012 massacre at Sandy Hook Elementary School in Newtown, Conn. The shooter used a Bushmaster AR-15 rifle to kill 20 children and six adults. The victims’ families sued Remington, claiming the rifle should not have been marketed for civilian use.

Remington argued to have the case dropped and contended it was immune from lawsuits over the commission of crimes by those using its products. But the Supreme Court disagreed in 2018, and the case is expected to go to trial in Connecticut superior court next year.

The most important news stories of the day, curated by Post editors and delivered every morning.