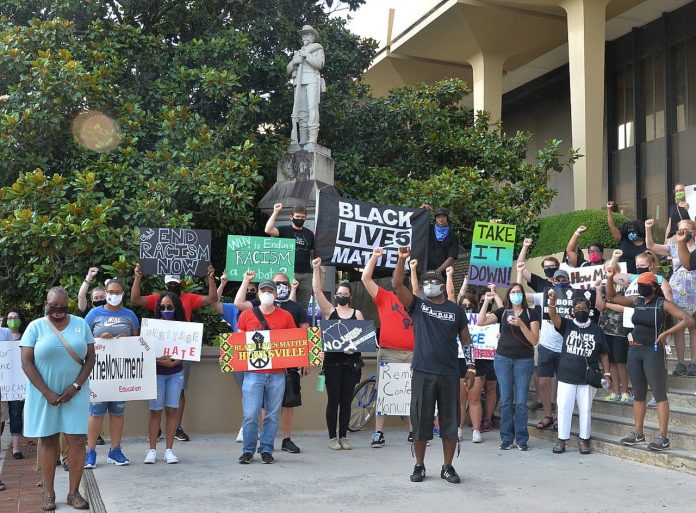 
A Huntsville city councilman can see how the struggle over the Confederate monument on the courthouse square will end.

It’s just a matter of when that ending takes place.

“This is something, in my opinion, that is inevitable,” councilman Will Culver said Monday. “It is going to happen. It’s just a matter of time.”

Culver’s comments, in discussing a resolution he sponsored last month at the Alabama League of Municipalities conference regarding historical monuments, was perhaps the bluntest assessment yet by an elected official about the future of the monument outside the Madison County Courthouse.

Both the county commission, who has jurisdiction over the monument, and the Huntsville city council have passed resolutions calling for the monument to be relocated to city-owned Maple Hill Cemetery. Still, the monument stands outside the main entrance to the courthouse despite regular protests to take it down.

The county commission has been reluctant to move the monument, first erected in 1905, in violation of the 2017 law that prohibited any disturbance of a historical structure that has been in place more than 40 years. Should the commission opt to move the monument beyond the restrictions of the law, it would be fined $25,000. The cities of Birmingham and Mobile earlier this year paid the fine to remove Confederate monuments.

A grassroots organization that routinely protests the presence of the monument, the Tennessee Valley Progressive Alliance, has said it has raised the money for the fine and has offered to pay it.

Momentum, though, appears to be building for the legislature to override the 2017 law when it goes back into session in February. A bill by Juandalynn Givan, D-Birmingham, has been prefiled that would restore control of historical structures to local government rather than a state review committee. House Speaker Mac McCutcheon, R-Capshaw, told AL.com last week that bipartisan conversations were ongoing about overturning the monuments law.

The resolution by the League of Municipalities, approved unanimously, would seem to be another push in that direction. According to its website, the league is a “nonpartisan membership association of nearly 450 incorporated cities and towns” that has advocated for those cities and towns since 1935.

The league’s resolution asks the legislature “to allow for local authority to relocate monuments covered in the (2017 law) to other areas, such as cemeteries or historical parks as local needs require.”

In the case of the monument in the Rocket City, the league’s resolution – if passed by the legislature and signed into law by Gov. Kay Ivey – would give the city of Huntsville authority to have it relocated. The city currently has no jurisdiction over the monument.

Culver emphasized, however, that the city council and the county commission are working in lockstep on removing the monument.

“No one really understands a particular location in our state better than the people, the local leaders and state leaders in those particular areas,” Culver said. “This is why I made this motion for this resolution. We want it passed (by the legislature) because it puts the authority, if you will, back to where it belongs, which is within those local communities throughout the state.

“It doesn’t mean every monument will be moved. There may be communities in the state that say we don’t want our monument moved. It gives the people, the voting public, the power through their votes to elect people who share their views.”