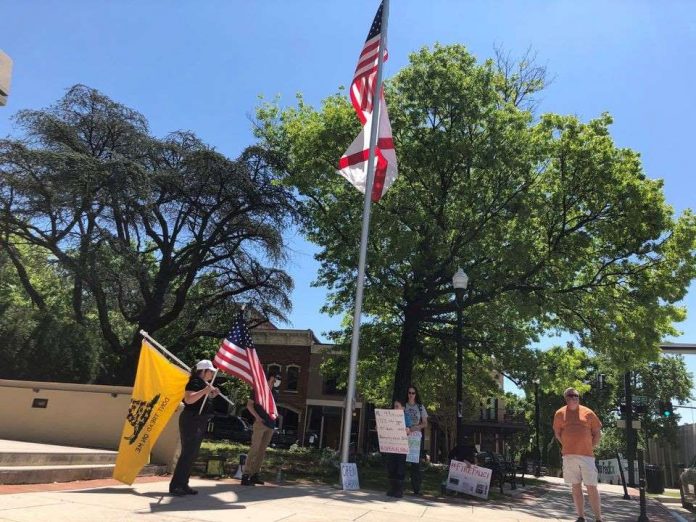 Citing concerns about freedom, liberty and economic turmoil, a small group of protesters rallied today in downtown Huntsville in support of the “Reopen Alabama” movement.

About 20 people, including children, gathered outside the Madison County Courthouse. Some wore masks and carried signs demanding the reopening of Alabama, while others questioned the threat posed by the novel coronavirus pandemic.

Justin Armstrong of Huntsville organized the rally through the Reopen Alabama Facebook page, the online hub of a movement to restart businesses and public activities shut down by a state health order to slow the spread of the novel coronavirus.

Rallies are being planned in other cities around the state, including in Montgomery on Tuesday. Today’s rally follows much larger protests in numerous states including Michigan, Kentucky and Washington.

Armstrong said he wants local leaders to hear the concerns of people who are suffering economically and help them.

Speaking at a Huntsville briefing today, Mayor Tommy Battle didn’t address the rally. But Battle said he anticipates beginning the process of reopening during the first week of May. Alabama’s state health order, which closes “non-essential businesses” is set to expire on April 30.

Armstrong, who is from Huntsville, said because of the state health order he lost his job at Workout Anytime, a gym in the nearby city of Athens. He said he was denied unemployment benefits and hasn’t been able to reach anyone at the state Department of Labor to determine why.

But many Alabamians, like Armstrong, have complained about the unemployment website crashing and being unable to reach anyone by phone. The Labor Department said today that an additional call center is opening with more than 60 employees to answer phones.

Armstrong said if the government is going to prevent people from working, it has a responsibility to take care of its citizens.

“I’m not looking for a handout, but if you tell me I can’t work, then I expect the handout,” he said. “If not, let me go to work and let me be safe about it.”

Armstrong said he believes the novel coronavirus is a health risk, but the public should be allowed to make its own decisions about how to remain safe.

Donny Letson, who owns a local business repairing medical equipment, said he is concerned about the government infringing on the rights of citizens under the premise of protecting people from the virus. Letson, who held a “Reopen Alabama Now” sign, said he does believe the novel coronavirus is a “bad” virus but questions whether shutting down is an overreaction.

At a rally in Denver, two health care workers donning green scrubs and masks, stood in an intersection to block cars of protesters and “remind” people why shutdown orders are in place.

Asked about the movement to reopen the country in an interview on Good Morning America, Dr. Anthony Fauci, the director of the National Institute of Allergy and Infections Diseases, acknowledged the economic pain caused by lockdowns but said reopening too quickly could “backfire”.

Letson said he doesn’t believe saving the economy is a partisan issue, nor did he attend the rally because of his support for President Donald Trump.

Huntsville resident Betsy Rosema, however, said she believes the virus has been overblown by the news media and Trump’s political rivals. She said after Trump was impeached by the Democratic-controlled House and acquitted by the Republican-controlled Senate, the president’s enemies decided to use the coronavirus as a way to harm the president.

“It was all their ploy to get rid of him,” she said. “It was their final try before the election. They cannot stand this president and that is all it was.”

Rosema, who waved an American flag during the rally, acknowledged that people have been killed by the coronavirus.

“Most of these people are people that would have died anyway,” she said. “They’re old, a lot of them are homeless, have other conditions. If they get a bad case of the flu, they die. That’s what old people do. That’s what happened with this.”

It’s true that the majority of people — 72 percent as of Friday — killed by the coronavirus in Alabama were older than 65, according to the state department of public health. But health officials have said younger, healthy people aren’t immune from the virus or the potential for death.