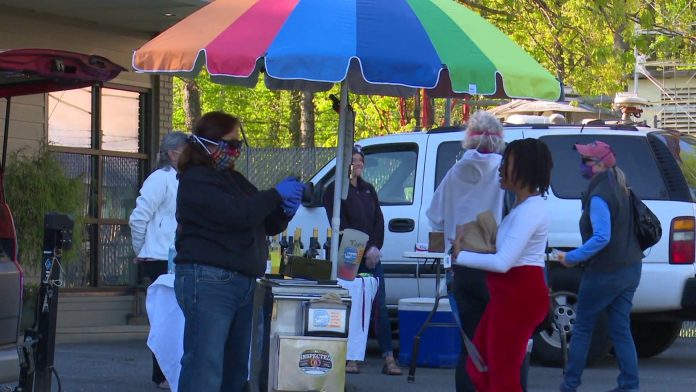 HUNTSVILLE, Ala. – After years of hard work and planning, Phat Sammy’s bar and restaurant finally opened their doors on March 18th. But on March 19th, all restaurants were forced to close in-house seating and go curbside only.

Now they are trying to serve customers during these strange times.

Jeremy Concepcion is the beverage director. He says quickly adjusting to take out only wasn’t easy,
“Long days, long nights, 6 days a week.”

You’ve probably never been inside Phat Sammy’s but if you could you’d see just like the times we are living in, it is anything but normal.

Jeremy Esterly is the Executive Chef and owner. He describes their basement building as a unique space for people to gather,

“It’s bright, eclectic, purposely chaotic so that it gives people a reason to look at things. We purposely don’t have TVs behind the bar because we want people to engage and look around and talk.”

For now, we have to interact with each other virtually, and that is something Phat Sammy’s and many other restaurants are working to master.

“Social media has helped a lot, for the most part, people who come here are really good about promoting what they have eaten what they have tried,” says Esterly.

The restaurant engages followers with daily Facebook Lives and posts vibrant pictures of their menu items which are the product of a lot of experimentation.

“So we have a Chinese chili dog on the menu, but the chili is mapo doufu. It works really well with a hot dog, oddly enough, so that exposes people to be like ‘oh I’ll try the hot dog or the hamburger ‘ because it’s like a Big Mac but it’s Korean,” says Esterly.

That goes for the bar as well, they are serving drinks in purple cups but also to-go bags.

“So they closed us down and actually made it legal for us to do that and so Jeremy suggested we do ‘cutty bangs’ so we actually started serving cocktails,” says Concepcion

And as we navigate through these uncharted waters, local restaurants thank the community for pulling them through.

Concepcion says, “The community has been really supportive. I cannot believe how much they are coming out.”

Now they are waiting for the day all local restaurants can reopen. So customers can do more than grab and go.