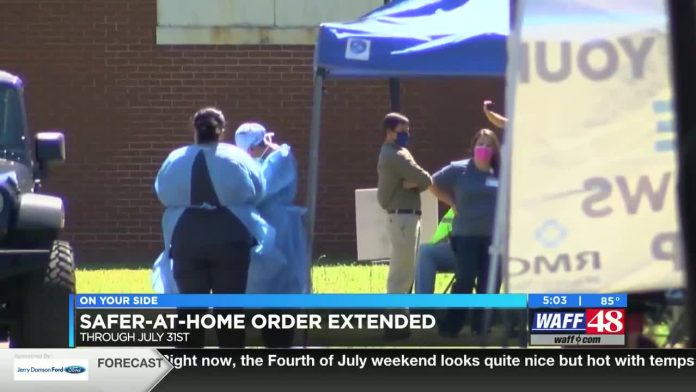 
Gov. Kay Ivey announced the extension of the state’s Safer at Home order that was originally set to expire this Friday.

Right now, you are still encouraged to stay home. If you do leave your home you are asked to keep your distance and wear a face covering.

The order will now expire 5 p.m. on July 31. Currently more than 37,000 Alabamians have been diagnosed with the virus, 926 people have died because of it.

The governor said everyone needs to follow the state's social distancing guidelines for life to get back to normal.

Across the country more than 20 states have passed some kind of masking mandate. While the governor is encouraging people to wear a mask, she believes enforcing it would be nearly impossible.

A restaurant owner with locations in Huntsville and Madison is happy things will stay the same, rather than being forced to close again due to an increase of cases.

Stinson said his business is currently running at 50-percent of his normal rate. He said it is better than being shut down, however is worried because money from the Protection Program is beginning to run dry. Small-business owners won’t be able to access that money after Tuesday.

Applications must have been approved by the end of the day Tuesday to access the $130 billion that remains in the Paycheck Protection Program.

The loans are funded by the CARES Act and that money can be considered a grant if used according to certain parameters set by the federal government.