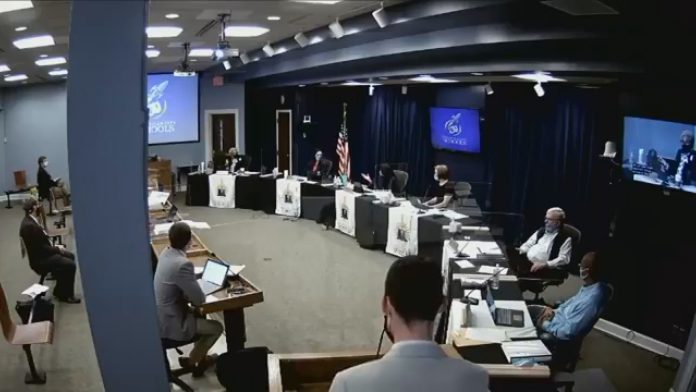 With all of the schools in Madison County preparing to start the year virtually, one of the districts offered the possibility that students who intend on returning to the classroom may not have to wait a full nine weeks to do so.

The news came during the Huntsville City School Board meeting Thursday night. It was the board's first meeting back at the Annie C. Merts Center since March.

School Board President Elisa Ferrell said a consortium called MUSE (Municipalities United to Support Education) is examining whether a faster return to the classroom would be possible.

"We're looking at those numbers. We might not be out for the entire nine weeks. We might be able to come back early, but it is entirely dependent on our community being complicit with the face masks as well as the hand washing and the social distancing," Ferrell said.

"Let's talk to the Madison County Department of Public Health and find out when the perfect time will be and what's that going to look like," Ferrell said.

"We don't want to come back too soon because then we might be out for a longer period of time, but we also don't want to stay out any longer than we have to."

Many parents across the city school system are looking forward to when their children are able to safely return to the classroom. Wendy Robinson said even though there are some members of her family who are at a higher risk for contracting coronavirus, she said they decided to choose the option that will allow her daughters to return to in-person learning this fall.

"They're all different age levels. It was hard for us to navigate kindergarten, first grade, seventh grade, eighth grade back at the end of last school year and there are things that I feel that they need in-person instruction on versus away," Robinson said.

Robinson knows all too well the impact of the virus. She said members of her family and friends have been impacted by the virus and on Mother's Day, she was in the hospital with her daughter, Kania, after she was diagnosed with multisystem inflammatory syndrome in children (MIS-C).

"Within hours her white blood cell count was crazy, her entire body shed like a snake, I mean it was scary. We were in the hospital for a minimum of eight days battling with this," Robinson said.

Fortunately, Kania recovered and was released from the hospital and none of her other children contracted MIS-C.

Robinson said families need to be cautious and take safety precautions when they eventually return to school.

"When people say COVID is not real or it won't attack children, I'm not worried about that part. There are other deviations of this disease that will attack children. And again, she was the only one in the house who had never left. So that meant that someone in the house had to have gone out and brought it back to her," Robinson said.

In addition to the return to school, the Huntsville City Schools Board of Education also discussed access to the internet for low-income households.

Ferrell said the district is looking at ways to help families gain reliable internet access as the state pushes out money for the initiative.

"The state has committed to $100 million for low-income families with internet access problems. So we'll be taking advantage of that for our city, for those students and those families that need that. And we are also looking for a back up with local providers and we're working on those numbers right now to make sure we can find something that is the most cost-effective for our families and for us," Ferrell said.

She added that in the meantime, families can go to everyoneon.org and abcstudents.org to get more information about their current internet situation and some possible remedies.

The first day for Huntsville City Schools is August 17.