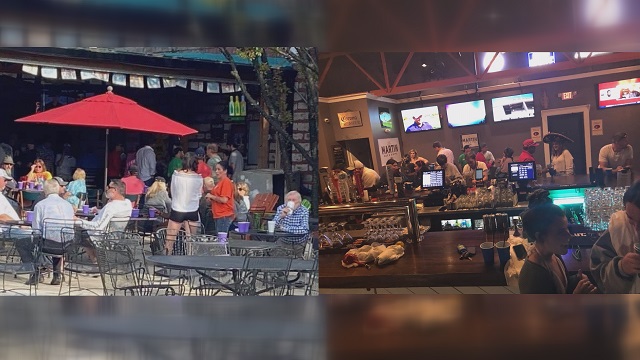 WAAY 31 went by The Martin Bar & Bistro and Furniture Factory on Wednesday to ask about the pictures. Neither business wanted to comment about them.

Furniture Factory was closed on Wednesday, so it had no customers inside.

The Martin Bar & Bistro allowed WAAY 31 inside, and there were no customers in the bar while we were there.

However, Huntsville Mayor Tommy Battle discussed the pictures at a news conference held on Wednesday about coronavirus.

"We had a blip yesterday. Cinco de Mayo might have been a reason for the blip," he said.

Battle said plenty of people sent his office these pictures on Facebook. He said it appears the restaurants might have violated the health order.

"You can't make a case out of a picture. It's pretty clear we have some education to do on those people to make sure they don't do that, and that is not allowed. You cannot eat on premise. You cannot serve on premise right now," Battle explained.

The Martin Bar & Bistro and the Furniture Factory didn't want to talk about the photos and wouldn't confirm if they're from Tuesday night.

David Spillers, Huntsville Hospital CEO, said if the photos are recent he's worried one customer with coronavirus at either bar could lead to a problem.

"Where there is one sick person they could infect 4 or 5, who can easily go back and infect 4 or 5 more, and all of a sudden, we've got a real issue on our hands," Spillers said.

Battle's message to both restaurants and anyone thinking about breaking the health order is clear.

"It is serious because it almost gets down to a selfish end of it. You say, 'I'm going to do what I'm going to do but, I'm not worried about anyone else,'" Battle said. "I think that's a real simple answer to them. Do not follow that example, If so, you will have somebody come talk to you," he said.

The police department said officers talked with both restaurants Wednesday.

Battle said he's working with police and the city attorney to educate businesses about the health order.