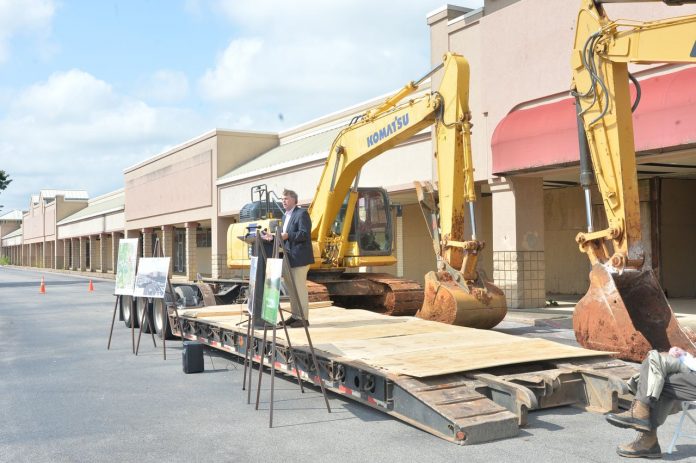 Publix will open in the new complex called “The Market at Hays Farm” in the fall of 2021, developers said. Demolition of the Haysland Square strip center now on the site will be complete in “about two weeks,” lead developer Richard Lee said.

The center will ultimately house 150,000 square feet of shops, restaurants and “service tenants” in “roughly five separate buildings,” Lee said. The Staples store now on the property will remain.

The new development will help fuel what landowner and developer John Hays called a “renaissance” in the area. Hays and his family own the land they are developing into Hays Farm, a residential area of up to 1,000 new homes located behind the shopping center and next to growing Redstone Arsenal.

That development including a 9-acre city park, 6-acre lake and an entertainment area is expected to enter an already growing real estate market in the city. Fueling that growth is a large FBI center moving to the arsenal, a joint Toyota and Mazda automobile factory and growing aerospace, defense and technology segments of the economy.

“This is a dream a long time coming,” Hays said today. “We’ve met and talked with (homeowners’ associations) as far back as 15 years ago with this idea of what might happen here. The dream is now a reality, and I think you’ll see home prices reflect that as of 10 o’clock this morning (the time of the announcement).”

Battle said the new development will bring new homes, retail and office space together “in an urban development that makes people want to come together as a community.”

“This is going to be one of the best things to happen to (the area) in a long time,” area City Councilwoman Jennie Robinson said. “The ripples will go up and down the Parkway.”

The developer of the center, Branch Properties, is based in Atlanta. It has developed 45 Publix-anchored shopping centers around the Southeast, Lee said. Collaborating on the project is Florida-based Tailwinds Development, which has built more than 15 Publix-anchored centers.