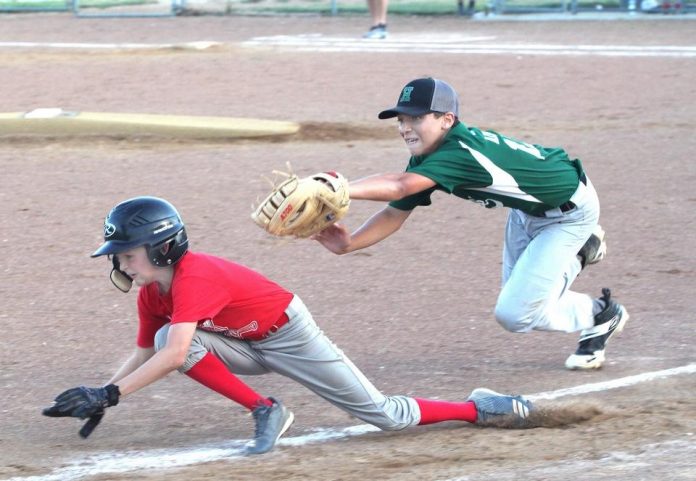 
Jimmy Smothers’ roll of the dice on a coaching decision scheme when the stakes were high Monday arguably became a difference make of which Moberly Midget Baseball League team would be playing for the age 12U division’s season championship the next evening.

“Whew. The luck of that decision rolled in our favor,” Smothers said. “This game kind of became ugly with all the errors both of us made. We barely held on.”

The Spartan Cages, the No. 3 seed in the 2020 division semifinals, were clinging to an 11-10 lead against second-seed Huntsville Hive in the bottom of the fifth when the Hive had a runner on second with two outs and Huntsville’s Marshall Kitchen, the team’s No. 3 batter in the lineup, was ready to step inside the batter’s box and D.C. Dale was waiting on deck for his turn.

On the mound at Moberly’s Howard Hils Athletic Complex was Max Richardson. A position the Spartans Cages southpaw pitcher owned since the words “play ball” was voiced by the home plate umpire, and Kitchen was about to become Richardson’s 30th batter that the 12-year old was about to face.

“Max pitched a great game, and pitched himself out of some tough situations a couple of times. He threw a lot of pitches for us. He was quite impressive and this was his second time pitching a full six innings,” Spartan Cages coach Smothers said. “Max wanted the ball. I talked to him a couple of times but he really wanted to keep pitching and get the job done, and I trusted him. His velocity was still good throughout the game. He had walked just three batters and I don’t recall him throwing any wild pitches. Max also had good defensive help behind the plate with Drew (Smothers) catching. I don’t think we gave up any runs from a passed ball.”

Kitchen already produced two hard-hit singles and was robbed of potential 2-run extra base hit along the right field line on a line drive caught by the Cages first baseman Kolton Adrian. Dale, the Hive’s power hitter, had smoked a 2-run single to left and reached twice on errors earlier in the game.

“Their next three kids coming to bat are pretty fierce, good contact hitters. The first two coming to bat, Marshall Kitchen and D.C. Dale, I have much respect for and did not want to take our chances with them so I intentionally put them on to load the bases and make it a force out situation at any base for the team,” Smothers said. “A situation like this is something I thought about before the game. I thought about and pre-planned what to do if certain scenarios happened, especially with those two guys coming to the plate. They also had a couple of players on base with good running speed (Gage Adler, Dylan Eustace). One swing of the bat by either one of them could change the outcome of the game. I respect them a lot in that I did not want them to have the bat in their hand.”

Smothers decision paid dividends as the luck of the dice rolled to favor Spartans Cages. Richardson induced Huntsville’s Nathan Galland to pop-up in the infield and it was fitting for the fly ball to land in Richardson’s glove for the final out.

When the bottom of the sixth arrived, the Spartan Cages could not provide an insurance tally and some needed breathing room for their baseball fanbase to inhale.

But Richardson still had fuel in his tank. The lefty got the job done sending the bottom portion of the Hive’s batting order down 1-2-3 recording.

A strike out was the last task that punched the Spartan Cages ticket to Tuesday’s championship game where the Spartan Cages (8-3) engage battle with undefeated Centralia Thunder (10-0) at 8 p.m. The 6 p.m. third place contest pits the Hive (8-2) against Glasgow Yellow Jackets (7-4). Thunder defeated Yellowjackets in the other 12U semifinal game Monday.

“I’m pretty proud of my team. We’ve had our share of challenges. Tonight they shook off the bad stuff that happened and kept fighting,” Smothers said.

Richardson ended up yielding 10 base hits, walking three and striking out five while earning the win. Half of the runs charged to him were unearned.

Coach Smothers said with Richardson going the distance, Tuesday’s championship game allows him to use any or all of his next three top pitchers as the Cages look to garner the upset by using Drew Smothers, Ashton Hunt or Collin Knox.

The MML’s age 12U teams each had their fair share of mishaps as they combined to commit 10 errors that led to 11 unearned runs between them.

All six of the Spartan Cages runs from their first plate appearance were unearned en route to building a 6-3 lead for Richardson to work with. The Hive tacked on a couple of runs in the bottom of the third inning to forecast that this contest would become a nail-biter to the end.

Kolton Adrian made a remarkable defensive stop at first base in the bottom of the fourth frame that likely prevented Huntsville from taking over the lead and perhaps changed the outcome of this game. Spartan Cages led the Hive 10-7 when Huntsville had runners on second and third with one out when Kitchen smoked a hard-liner toward the right field line when Adrian reached for the ball that was about shoulders-high for the second out and he almost made a double play out of it.

“That could have easily gone for a 2-run double, maybe a triple down the line,” Smothers said. “No doubt about it, Kolton made the best defensive play of the game right there.”

Drew Smothers hit a double and he drove in two runs for the Cages. Ashton Hunt, Richardson and Caden Abel all had one single.

Dale was the Hive’s starting hurler. He threw the first inning and gave up one hit and a walk, recorded two strikeouts and all six runs charged to Dale were unearned.

Marshall Kitchen was handed the ball to open the second frame and Kitchen ended up pitching 2 2/3 innings of relief. Kitchen gave up four runs, seven walks, three hits and he fanned five batters.

Gage Adler closed out the contest for Huntsville. He recorded five strikeouts, walked three batters and one unearned run was charged to him.

Adler went 2-for-4 with a double and 2 RBIs in a losing effort for Huntsville. Brendan Callahan, Skyson Trusty, Galland, Dale and Dylan Eustace each had a hit.