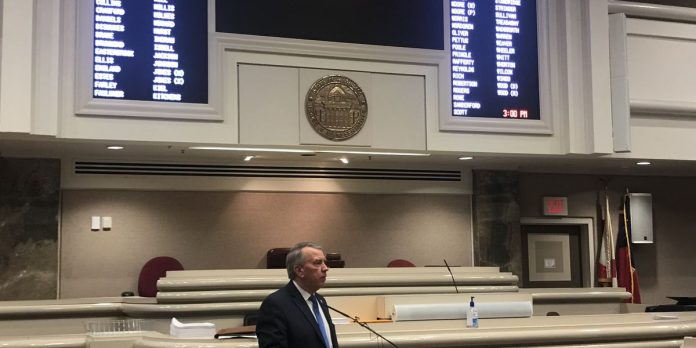 
MONTGOMERY, Ala. (Alabama Daily News) - Concerns about the coronavirus will keep lawmakers out of the State House for another week, their planned resumption of the legislative session now being Monday, May 4.

The session has been on hold since mid-March and lawmakers had planned to be back next Tuesday, April 28. After meeting with Gov. Kay Ivey this week, House Speaker Mac McCutcheon, R-Monrovia, and Senate President Pro Tem Del Marsh, R-Anniston, announced they would postpone the session further.

“My ultimate concern is in doing it in such a way that we can do it safely and we can bring members in here to conduct business and bring them back home without getting sick,” McCutcheon said.

State law limits the number of days in a regular session and this one has to end on or before May 18. Because of the shortened time frame, passage of the education and General Fund budgets will be lawmakers’ priority.

Bare bones budgets that reflect the drop in income and sales taxes as businesses have closed in response to the coronavirus are expected. State Finance Director Kelly Butler said this week he anticipates a drop-off of as much as $1 billion in tax revenue due to the outbreak.

“It is imperative that we continue to meet and finish out the session as we move to reopen Alabama,” Senate President Pro Tem Del Marsh, R-Anniston, said in a statement. “The people elected us to lead and send us to Montgomery to pass budgets and keep the state moving forward."

“The Senate and House leadership have firmly agreed that state budgets and local bills will be the only matters discussed, debated, and voted upon in the remainder of the session,” McCutcheon said. “The governor always has the option of calling us into a special session later in the year to address other issues of importance.”

Sen. Arthur Orr, R-Decatur, who chairs the Senate education budget committee, said lawmakers could do supplemental appropriations if more money is available early in 2021 when they begin the next regular session, or during a special session later this year.

Exactly what a socially-distanced session will look like was still becoming clear Thursday. The eight-story State House building is often crowded with lobbyists, the public and state agency representatives.

McCutcheon said the public will not be allowed in the building and that lawmakers would be required to wear masks in the chamber. Senate Majority Leader Greg Reed, R-Jasper, said legislative staff is working on the best ways to safely conduct the remainder of the session while also being “open and transparent” for members and the public. Reed said providing live streaming of committee meetings and floor action was in the works.

“Is it the fluid situation?" Reed said about restarting the session. "About the most I’ve ever been associated with."

In the Senate chamber, the 35 members can spread out. In the House, members are allowed to cast votes for each other, so not all 105 representatives would need to be in the chamber at once.

“It sounds good, but realistically, there are things that happen when both chambers are in session like sending bills back and forth and dealing with different amendments. A lot can go wrong,” he said.

Orr said prioritizing must-pass bills will make social distancing easier. There won’t be multiple committee meetings happening at the same time, he said. So when the General Fund or education budget committees do meet, overflow rooms will be available.

“The Senate has already identified bills that will be priority and they’re not many at all, other than the budgets,” Orr said.

House Minority Leader Rep. Anthony Daniels, D-Huntsville, said this week he wouldn’t come to the State House until every member of the Legislature had been tested for COVID-19 and the results were released.

“A lot of the other members have underlying conditions that would put them at high risk,” Daniels said. His concern is asymptomatic carriers who don’t have coughs or fevers.

McCutcheon said Thursday that members will not be required to be tested for COVID-19 but that access to testing will be available.