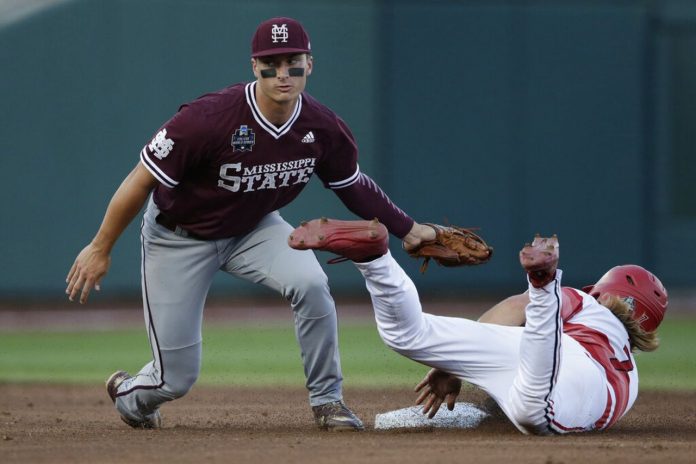 
Picked by the Texas Rangers in the first round of the MLB First-Year Player Draft on June 10, former Grissom High School standout Justin Foscue normally would be preparing to report for his first pro assignment, probably with the Spokane Indians of the Short-Season A Northwest League, after signing his contract last week.

Instead, Foscue is trying to stay ready by finding places to work out and take batting practice back home in Huntsville (which he told Dallas-area reporters during a conference call is “a pretty cool place to grow up.”)

Baseball is on hold because of the coronavirus pandemic. With MLB team owners and players so far unable to reach an agreement to get the big-league season started after spring training came to an abrupt halt in March, the minor leagues seem increasingly unlikely to play at all in 2020.

“I think it’s just about perspective at this point,” Foscue said. “I think controlling what you can control is a big part of it. Trying to do everything you can to stay in baseball shape is the only thing I can do at this point. I’m taking it day by day. I’ll wait for the Rangers to contact me about where I need to report and when I need to report. But I think doing the things I can in my hometown right now is the most important thing, and that’s the only thing I can control. I can’t control anything else. …

“It’s not the same as what you would normally be doing. You have to adjust. You have to kind of have a different perspective on this whole situation. You’re not able to do the things that you want to do, but if you’re wanting to do those things, you can find a way to make it happen.”

The Rangers selected Foscue after his third season at Mississippi State ended early because of the COVID-19 crisis. Foscue had a .321 batting average in 16 games, with 10 runs, four doubles, two home runs and 16 RBIs in 2020.

Foscue had played on Mississippi State teams that reached the College World Series the previous two seasons – as a third baseman in 2018 and a second baseman in 2019.

But even with that exposure, the chances to scout Foscue and the nation’s other top prospects was shortened by almost three months by the coronavirus shutdown. Foscue said the Rangers reached out to him in other ways.

“They were just trying to get to know me as a person,” Foscue said. “I think scouts can only do so much when looking at a game. They watch the way you play, but to get to know who someone is as a person and how they’re wired, I think, is another thing. I think that’s where I separate myself from other people, with my drive and my self-motivation, so I guess they liked what they saw and they listened to.”

Texas used the 14th choice in the MLB draft on Foscue and secured him with a $3.25 million signing bonus.

“We truly believe in this kid’s bat,” said Kip Fagg, the Rangers’ senior director of amateur scouting. “He’s been a big performer in a big conference. He’s some kind of competitor. … This kid, man, we talk about a lot the things we identify in players that kind of eat, breathe, sleep the game, and this guy’s, like, the epitome of that.”

The Huntsville City School coaches picked Foscue as the city’s Player of the Year for the 2016 and 2017 seasons. But he was not drafted coming out of high school.

“Throughout my whole life, I’ve never been the top-ranked kind of player,” Foscue said. “In high school, I never was highly touted or heavily recruited. But I always felt like I belonged in the SEC and the ACC, that kind of level of play, so I had a chip on my shoulder to prove people wrong. I believed in myself. I just went to work and I put my head down and I didn’t listen to the outside noise with the rankings and such. Just having that ability to not worry about the noise and distractions and always believing in myself, I think that’s how I got myself to this point.”

Foscue had hoped to be back in Omaha, Nebraska, right now for the annual College World Series, which had been scheduled for June 13-24.

“I miss it, that’s for sure,” Foscue said. “I’ve kind of treated this as a second offseason, you could say. A lot of people are saying that. But I miss playing baseball. I really hoped we would have gone to Omaha three straight years and made history, so that’s definitely disappointing, but I’m definitely excited to start this next chapter of my baseball career.”