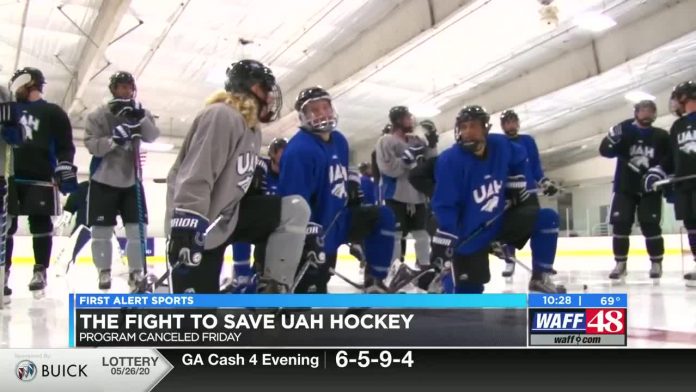 
HUNTSVILLE, Ala. (WAFF) - The UAH hockey program is on the brink. Dr. Cade Smith announced the move to cancel the program immediately as well as for men’s and women’s tennis Friday, May 22. One of the players spearheading the charger to raise funds is Jared Ross.

“We were very disappointed to hear that,” Ross said via phone interview. "Over the weekend there was a turn of events that there’s a roller coaster of emotions. All of a sudden Sunday we’re starting to hear those conversations of ways that we can save the program. All of sudden you go from being sad and disappointed to having a lot of motivation seeing that there is a way to get this thing continuing forward.”

According to those familiar with the situation, the hockey program needs $1 million to stay alive. Ross and donors have been told by UAH officials that they need $750,000 from their group of supporters.

If the goal is met, UAH has agreed to create an advisory board consisting of hockey alumni, local business leaders and major donors to help turn UAH Hockey into a world class hockey program.

“We have a group that we put together for this advisory committee, that would you know be able to plan and do things the right way,” Ross added. "That’s something we were lacking at the Division One program of any kind. It’s something we have an idea that we have to do right now is get them back on the ice the first year. And once we do that, based on what we’re seeing, we will be able to sustain it.