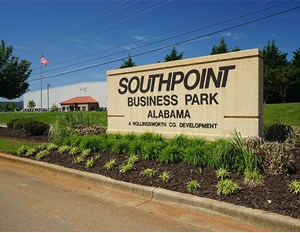 
The largest speculative industrial building to ever open its doors in Northern Alabama will soon take shape, now that The Hollingsworth Cos. has broken ground on an approximately 405,000-square-foot facility in Huntsville, Ala.

Hollingsworth is erecting the new development at the SouthPoint Business Park, a 175-acre industrial campus that the company opened at the well-traveled intersection of I-65 and I-565 in 1999. SouthPoint’s location in Northern Alabama—between Nashville, Tenn., and Birmingham, Ala.—places it within one day’s drive of half of the U.S. population. The development of South Point’s latest facility marks the park’s 11th industrial building and comes two years after Hollingsworth broke ground on the ninth and 10th buildings, which delivered a combined 283,000 square feet of speculative space. Upon completion of the latest addition, SouthPoint will total more than 1.9 million square feet.

Hungry for industrial in Huntsville

Despite the turbulence of COVID-19 and the uncertainty that comes with an election year, Hollingsworth asserts that it remains quite bullish on the Northern Alabama market, which holds the distinction of having been selected to host Toyota Motor Corp. and Mazda Motor Corp.’s planned $1.6 billion joint-venture manufacturing plant. As Joe Hollingsworth, CEO of The Hollingsworth Cos., noted in a prepared statement, Hollingsworth has grown its business on the belief that American manufacturing will continue to prosper, and the Southeastern U.S. will lead this growth. The company’s faith in the future of manufacturing in the region, however, is not the only indicator of demand for speculative industrial development in the Huntsville area.

Construction of Building 11 comes on the heels of a successful year for the Huntsville industrial market. In 2019, the city’s vacancy rate dropped to just 5.8 percent, the lowest vacancy rate in the area since 2008, and positive net absorption reached its highest point in a decade at 1.6 million square feet, according to a report by commercial real estate services firm Graham & Co. Additionally, Huntsville started the year with little risk of an oversupply of industrial accommodations. “Several smaller industrial buildings were constructed, but a large, spec, Class A industrial facility has not been built in the Huntsville market in many years,” according to the Graham & Co. report.