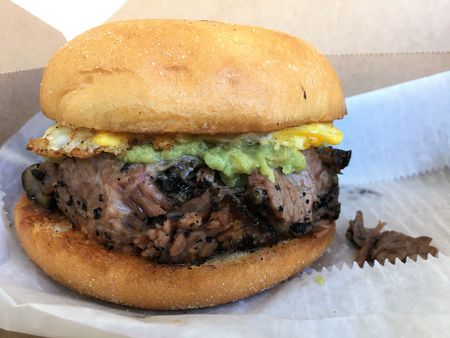 The most amazing, interesting and satisfying sandwich I’ve eaten this year was from a restaurant that doesn’t really exist.

Smoky peppery chopped brisket, topped with fresh avocado and fried egg on a delicately toasted brioche bun. Funky yet smart. It felt as heavy as some pets or maybe even babies, so maybe this was a meal more than a sandwich.

The sandwich, called the Cardinal Sinwich, is from the menu of a so called “virtual restaurant” in Huntsville called Heavenly Sinwiches. That sammie arrived on a recent lunch hour via local third-party delivery service GrubSouth.

Virtual restaurants have been trending in markets like Los Angeles, Austin, Texas and Chicago for years. The idea involves an existing food truck or brick and mortar using their already in place kitchen to develop and offer new delivery-only menus. And now, LeAndra and Thomas Poux, have their own virtual restaurant in Huntsville. Actually, two virtual restaurants – more on that in a bit.

The Pouxs are a married couple who own and operate Fire & Spice, a Mexican food meets Texas smokehouse restaurant in South Huntsville. They opened the restaurant in 2017, growing it from a food truck business of the same name, which they also operate most days of the week.

Fire & Spice wasn’t their first food-truck business-plan though. Years earlier, they worked on this creative sandwiches concept. But after buying the Fire & Spice food truck – they’d previously worked the truck as employees of local restaurateurs Stan Stinson and Tina Ford – the Pouxs were fond of the business name. They decided to continue Fire & Spice’s food direction. “He just kind of put Heavenly Sinwiches on the back burner,” LeAndra says.

Until a few weeks ago, when the Pouxs finally launched that idea. “We just don’t have the funds available to open up a second food truck right now,” Thomas says. However, with a virtual restaurant, since the Poux already have a restaurant, the kitchen and labor in place, “it just cost a couple hundred dollars to put a menu together and get a little bit of advertising done, things like that,” Thomas says, “So, it’s a difference of a couple hundred bucks and $50,000.”

So far, Heavenly Sinwiches’ best seller is their version of a Cuban sandwich. LeAndra intentionally limited the menu to seven sandwiches, in a nod to the seven deadly sins. Offerings thereof range from the vegan Spirit In The Sky (roasted red peppers, zucchini, poblanos, onions, microgreens, hummus on Texas Toast) to something called a Provocative Grilled Cheese (pulled pork, mac & cheese, pimiento cheese). The Pouxs previously tested the Cuban under a different name on the Fire & Spice food truck. “It would sell-out every time,” on the truck, LeAndra says, “so we knew we were on the right track.”

In addition to the aforementioned brisket-based Cardinal Sinwich, we tried the Southern Blessed. It’s fried chicken, a sweet-heat Sinful Sauce and pickles on brioche – and legit contender in a three-sammie steel-cage match with Chick-fil-A and Popeyes.

A la carte side options include cucumber salad and mac & cheese, each three bucks. The sandwiches run about $11 to $12 via GrubSouth. There’s also a $3.99 GrubSouth delivery fee involved. And, if you have a soul, a tip for the delivery driver.

Yeah, that’s more than we used to pay for mom-and-pop sandwiches. But that’s just how food prices are scaling. As an example, my go-to local fish tacos have risen in price from $8 to $13 since 2012. And then there’s the price of convenience, having food brought home right to your bedhead.

While Heavenly Sinwiches benefits from a preexisting kitchen, LeAndra says ” a virtual restaurant is nothing without the delivery system behind it.” The Pouxs had a strong multi-year relationship with GrubSouth through Fire & Spice. and ran their virtual concept by GrubSouth ownership during research. “They’ve been on-board since day one.,” LeAndra says. “And they’ve been helping us and promoting it.”

Through GrubSouth, Heavenly Sinwiches reaches a 10-mile radius customer base. That’s a boon for the Pouxs, who faced early challenges in getting customers through the doors at Fire & Spice, address 11220 Memorial Pkwy. S.W. “We’re not in a district like (popular West Huntsville destinations) Campus 805 or Stovehouse. We don’t have all these great cool things right next door to us that bring the people in. But we were a food truck in the first place, so why not go to the people?”

Here’s how ordering from a virtual restaurant works. You download a food app, GrubSouth in this case, and find that virtual restaurant among available restaurants for the zip code you’re ordering from. There’s a photo for each menu item, a description and pricing. The rest is pretty intuitive if you’ve resided on Earth this century and purchased anything online. The GrubSouth app indicates what time to expect delivery, and also tracks progress: When the order is picked up, on its way and delivered. Our order took about 75 minutes. On Heavenly Sinwiches end, they mark each outgoing bag with order, completion and pick-up times. Ours was completed in 10 minutes, picked up 17 minutes later and arrived nice and warm. Packed inside cardboard boxes, inverted paper sides-trays prevent sideways sammies.

Since Fire & Spice already serves two cuisines not commonly under the same roof, tacos and barbecue, why not just add Heavenly Sinwiches items to the restaurant’s menu, instead of launching a new brand? A couple reasons, LeAndra says, “If it does turn out great, I can go to an investor and say, ‘Hey look, we’ve done this virtual restaurant and it has done well. Here are the numbers. I would like to start up another food truck.’ Whereas if I’m not keeping it a little bit separate (from Fire & Spice) it all kind of morphs into one.”

That said, if a customer at Fire & Spice wants to order a Heavenly Sinwich at the restaurant, the Pouxs are happy to oblige. At least now they are. “In the beginning I was actually completely against it,” LeAndra says. “No, no, they’re completely separate, but the more that I thought about it the sillier it is. I’m in the food industry so I’m never going to deny a customer great food that’s coming us.” At Fire & Spice, Heavenly Sinwiches prices are about $1.25 less than via delivery service.

“We have a couple years left on our lease here at our restaurant,” Thomas says, “and we don’t know what’s going to happen two years from now. South Huntsville is growing so maybe we’ll stay, maybe we’ll move down the road. We’re not sure.” So their virtual restaurants are a way of “keeping a lot of doors open.”

Thomas originally became aware of virtual restaurants by reading national food blogs like Eater. The Pouxs first met on the social media platform Myspace, so maybe that helps explain their comfort with the digital realm. (If you’re curious, the first restaurant they ever ate at together was a rib joint.)

The Poux credit friend and fellow food-truckateur Keith Hill, of I Love Bacon, for encouraging them to move forward with their virtual ideas.

“The first questions I asked were,” Hill says. “‘Can you build new brands and menus around ingredients that you already have in house? Do you already have employees on the clock during those hours? Could you add to gross sales without any additional sacrifice?'”

LeAndra and Thomas replied “yes” to all three, to which Hill replied, “Go! Do it now.”

Hill says, “Delivery apps are a numbers and coverage game. If you could build 10 different menus/brands around the same ingredients, you have 10 times the chance to sell your goods. It’s basically virtual real estate, and you own all 10 doors in the strip mall with one kitchen and one crew preparing all meals. The fact that any smart restauranteur isn’t already doing this, blows my mind. I think business-people get overly attached to their one brand. But the goal here is to sell as many groceries as possible.”

Close relatives of virtual restaurants include virtual brands, sold only via delivery apps/online, and ghost kitchens, facilities built for producing virtual brands. Hill’s been aware of these various incarnations for about five years. He cites a particular story of a failing pizza restaurant that turned things around by offering new virtual concepts.

“Netflix and food delivery go hand in hand,” Hill says, referencing the popular video streaming service. “And Netflix has been a huge disruptor in family entertainment – the model of ‘dinner and a movie’ has changed drastically.” Hill had been waiting and watching for what an analogous, food-business disruptor would be. He believes virtual restaurants, cloud kitchens and virtual brands are the first answers.

“Travis Kalanick, founder of Uber has liquidated most all of his stake in Uber and is going all-in on cloud kitchens,” Hill says. “My advice is, figure out where the majority of the delivery business is, determine a location with your dream customers inside the delivery radius, build a kitchen, and get to work. Because Travis Kalanick will be in your neighborhood in the next few years.”