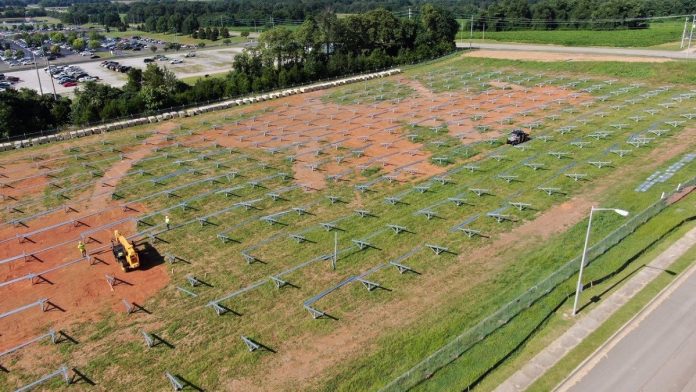 
The Toyota engine plant in Huntsville is playing a key role in the automaker’s new solar energy plan, as part of a $9.3 million investment designed to cut the need for outside energy in its operations across three states.

The company is adding nearly 11 acres of solar arrays in Alabama, Missouri and West Virginia, a setup that will offset 6,480,000 kilowatt-hours of energy, the equivalent of powering nearly 800 homes per year.

In Huntsville, Toyota Motor Manufacturing Alabama’s 3.3-acre solar array will be the largest built to date in Madison County.

The $2.7 million project, expected to be complete by the end of 2020, will generate 1.6 megawatts of solar-generated energy and reduce CO2 emissions at the plant by 1,732 metric tons annually.

Similar results are expected at solar arrays planned for Toyota facilities in Missouri and West Virginia. Altogether, the projects will generate 4.95 megawatts of energy and reduce CO2 emissions at the plants by 4,304 metric tons each year.

“We are committed to setting an example of sustainability to show how a company can significantly reduce the environmental impact of its operations,” he said.

Toyota previously installed solar arrays at plants in Texas and Mississippi as part of its global Environmental Challenge 2050 to eliminate carbon emissions from manufacturing by midcentury.

The company is one of the Top 20 corporate users of installed on-site solar capacity in the U.S., according to the Solar Energy Industries Association.

The Huntsville engine plant has been a critical part of Toyota’s North American operations since production began there in 2003. It is one of the company’s largest engine plants worldwide. The facility produces about 2,500 engines per day that power one-third of the Toyota vehicles built in North America.

It has expanded five times, with a total investment of $1.2 billion and a 1,400-member workforce.

The latest expansion, a $288 million project announced last year, is boosting production to 900,000 engines per year and adding 450 jobs.

Toyota is partnering with Mazda to build a $1.6 billion automotive assembly plant in Huntsville.