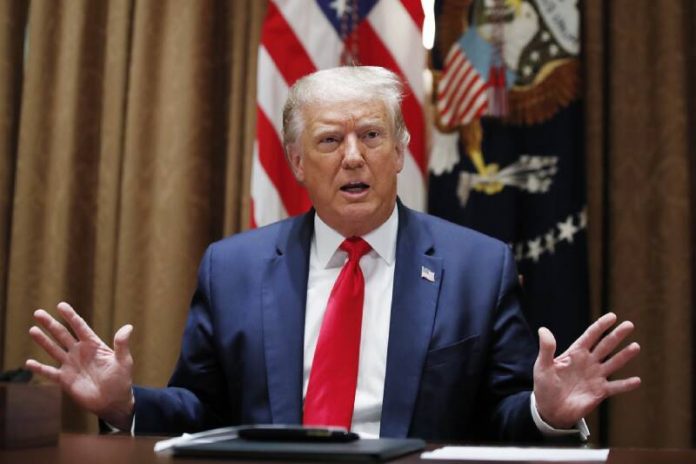 WASHINGTON (AP) — President Donald Trump said Monday that he had fired the chair of the Tennessee Valley Authority, criticizing the federal-owned corporation for hiring foreign workers.

Trump told reporters at the White House that he was formally removing chair Skip Thompson and another member of the board, and he threatened to remove other board members if they continued to hire foreign labor. Thompson was appointed to the post by Trump.

The TVA is a federally owned corporation created in 1933 to provide flood control, electricity generation, fertilizer manufacturing and economic development to the Tennessee Valley, a region that was hard hit by the Great Depression. The region covers most of Tennessee and parts of Alabama, Mississippi and Kentucky as well as small sections of Georgia, North Carolina and Virginia.

He also said the TVA board must immediately hire a new chief executive officer who "puts the interests of Americans first." According to Trump, the CEO, Jeff Lyash, earns $8 million a year.

"The new CEO must be paid no more than $500,000 a year," Trump said. "We want the TVA to take action on this immediately. ... Let this serve as a warning to any federally appointed board: If you betray American workers, you will hear two words: 'You're fired.'"

Trump said the authority was replacing many of its in-house technology workers with contractors who rely heavily on foreign workers under the H1-B visa program for highly skilled workers.

"All TVA employees are U.S. based citizens," said authority public information officer Jim Hopson. "All jobs related to TVA's Information Technology department must be performed in the U.S. by individuals who may legally work in this country."

"As a federal corporation, TVA's Board members serve at the pleasure of the President," Hopson added.

As Trump was meeting with workers who would shortly be laid off by the authority, Trump was passed a note from chief of staff Mark Meadows that said Lyash had called the White House and was promising to address the labor concerns. Some of the attendees, who are set to see their last paycheck at the end of the month, teared up as Trump read the message.

Trump acknowledged that he was made aware of the issue after seeing a television ad produced by U.S. Tech Workers, a nonprofit that wants to limit visas given to foreign technology workers, that aired in prime time on Fox News.

The group, led by Kevin Lynn, criticized the TVA for furloughing its own workers and replacing them with contractors using foreign workers with H-1B visas. The ad, Lynn said, had an "audience of one," aiming to persuade Trump to stop the TVA from outsourcing much of its information technology division.

Trump made the announcement as he signed an executive order to require all federal agencies to complete an internal audit to prove they are not replacing qualified American workers with people from other countries. The White House said the order will help prevent federal agencies from unfairly replacing American workers with lower cost foreign labor.

The order followed the TVA's announcement that it would outsource 20% of its technology jobs to companies based in foreign countries. TVA's action could cause more than 200 highly skilled American tech workers in Tennessee to lose their jobs to foreign workers hired on temporary work visas, according to the White House.

But Republican Sen. Lamar Alexander of Tennessee said the TVA doesn't get any taxpayer money. Commenting on the issue in April, Alexander said the White House was spreading misinformation. He said that TVA chief executive officers' pay is lower than other large utilities and that TVA energy rates are among the lowest in the nation.

Trump previously denounced the pay given to TVA's president as "ridiculous" and denounced corporations that shift work overseas.

His announcement Monday came after he met with information technology workers in Chattanooga who lost their jobs at TVA when the federal utility outsourced their jobs to outside contractors. U.S. Tech Workers are spending more than $100,000 on television ads to convince Trump to fire Lyash for outsourcing computer jobs in Chattanooga, Knoxville and Huntsville to contractors, many of whom are headquartered outside of the United States.

TVA laid off 62 IT workers in June and idled another 38 workers in July. TVA spokesman Jim Hopson said Monday "all jobs related to TVA's Information Technology department must be performed by in the U.S. by individuals who may legally work in this country."

The federal utility has contracted with CapGemini, which is based in France and has nearly half of its workforce in India, the Canadian-based CGI, and Accenture Federal Services, which is headquartered in Virginia and is a subsidiary of the Irish-based Accenture plc, for some of TVA's IT work.

The president last month tweeted that TVA is "not run by the U.S." and called an television commercial urging him to fire TVA's CEO for outsourcing American jobs "another one of many Fake T.V. Ads."

But the president moved Monday to push TVA toward making changes in its IT operations.

TVA board members, however, do serve at the pleasure of the president and Trump has expressed his displeasure at both the salary paid to TVA's president and the outsourcing of IT jobs by TVA. The president has repeatedly criticized the TVA board for making TVA President Jeff Lyash the highest-paid federal employee in America.

Trump, who is paid $400,000 a year as president, has urged TVA to cut the $8.1 million compensation package given to TVA CEO Jeff Lyash "by a lot."

The International Federation of Professional and Technical Engineers Local 1937, which represents about 2,500 workers at TVA, has objected to the outsourcing, claiming it violates TVA's mission of promoting economic development in the Tennessee Valley.

Gay Henson, president of the IFPTE Local 1937, said TVA workers are now having to train their replacements and many of the new contract workers are not U.S. citizens but are working in America under H-1B visas.

Outsourcing the IT won't necessarily save TVA money and doesn't reflect any drop in the IT workload, Hopson said. The TVA spokesman said the contractors hired for such work have greater industry expertise and experience in implementing software changes as TVA continues to upgrades its technology and cybersecurity programs.

Hopson said TVA has worked with the Engineering Association union under the contract review process over the past year before making the change.

"After reviewing the findings, IT leadership has concluded that certain support functions can be performed with greater flexibility and faster access to innovation by using other firms who specialize in these services," he said.

Trump moves were applauded Monday by Tennessee senatorial candidate Bill Hagerty, a former trade ambassador in the Trump administration who has been endorsed by President Trump to succeed the seat being vacated by the retiring U.S. Sen. Lamar Alexander, R-Tenn.

"President Donald Trump is right, we can't outsource American jobs at a time when our unemployment rate is higher than ever," Hagerty said. "President Trump and his Administration have taken unprecedented steps to keep people employed during this difficult period and it flies in the face of those efforts when TVA decides to outsource Tennessee jobs at this time."

Previously, U.S. Rep. Steve Cohen, D-Memphis, had urged Congress to include in coronavirus relief measures a requirement that TVA and other federal agencies not be outlawed to outsource IT operations.