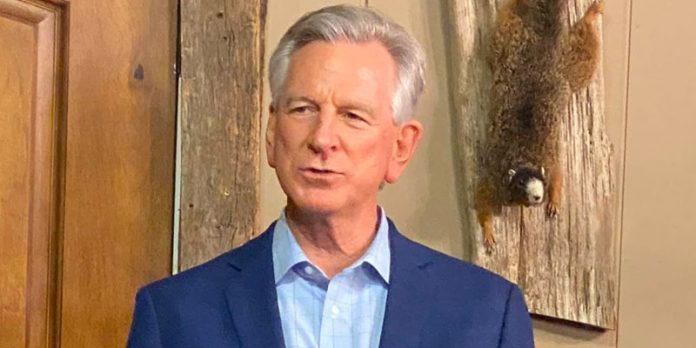 
For some small businesses, promises from the government to help bridge the economic gap created by a mandated halt of activity have gone unfulfilled, which according to former Auburn head football coach Tommy Tuberville, illustrates the shortcomings of the government.

On Monday in an interview with Huntsville, AL radio’s WVNN, Tuberville, a Republican candidate for U.S. Senate in Alabama, weighed in on the possibility of Alabama reopening its economy in the near-term, which he said he expected to be a process that could go on for some time.

However, he also said it presented other opportunities, including the rollback of some government agencies.

Tuberville said he anticipated Alabama’s long-awaited resumption of activities could take until June.

“[I] think they’re going to start rolling it out this week in the state of Alabama,” Tuberville said. “We’ll go slow. I would imagine June 1 is really the focal point where we get everything kind of opened up. We’re going to have social distancing and all that for a long time. I think through the first of next year, maybe this time next year — you’re going to keep hearing the term. It just depends on how much we get this quelled down over the next few months.”

On the seeming double-standard applied to large and small business, Tuberville said he recognized the urgency small businesses were facing and offered his own proposal that may have been a stopgap measure.

“You go into a Walmart or a grocery store, you run into people,” he continued. “I mean, it’s a little bit different in those places. We’ve got 30 million small businesses in this country. Every day we’re losing some. As we were talking beforehand, hindsight is 20/20. But we could have taken all 30 million of those, and said, ‘Listen, we’re going to be closed for a month to six weeks. You pay your employees. You do whatever you need to do. But we’re not going to be able to be open. You send your check through the bank, and we’ll reimburse the bank. I think what you and I were talking about — there’s so many of these small business people that have not gotten anything. I know people that have gotten four, five, six million [dollars]. We’ve got to have better ways to do things.”

However, he noted the effort currently underway by the federal government was not executing according to plan, which was indicative of government in general. That led him to point to the Transportation Security Administration (TSA), which he said was an example of this phenomenon, adding now might be the right time to privatize the TSA.

“Obviously, in government, we don’t do anything well,” Tuberville added. “We just do stuff. And we throw money at it. And money is always the answer. And it’s really not. It’s really not the answer. It’s the reason I’m a conservative. I really believe we’ve got too much government. This would be a great time to tell that TSA that runs these airlines, ‘Hey, we’re fixing to sell this off to a private entity, and we’re going to get out of the TSA business, and several other things that government can’t control or can’t do right.”

Extending freedom is not irresponsible

When Georgia’s governor announced that the state would allow some non-essential businesses to reopen, everyone had an opinion. What I heard and read most often, however, was how his lifting of restrictions was, “reckless” and “irresponsible.”

I see a glimmer of hope in Governor Ivey’s recently issued “Safer at Home Order” as it lessens some restrictions on individuals, families, and businesses, but we must do more to quickly return to a sense of normalcy, normalcy which is rooted in individual liberty and free choice.

Friends, having the freedoms granted to us by our Creator, recognized by our founding fathers, and protected by our Constitution, is not irresponsible.