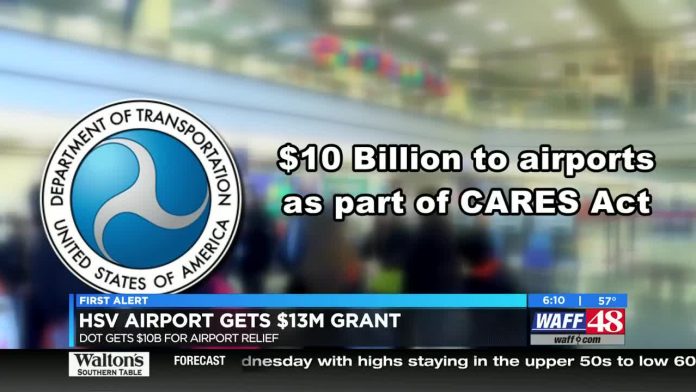 
HUNTSVILLE, Ala. (WAFF) - The U.S. Department of Transportation is cutting a multibillion dollar check to keep America’s airports running, and Huntsville is getting millions.

As part of the CARES ACT, the department is giving approximately $10 Billion to roughly 3,000 airports across all 50 states.

Airports Council International, which represents airports globally, estimates airports in the United States will lose nearly $14 million due to the pandemic.

The release stated: “In order to accept this grant, Huntsville International Airport is required to maintain 90% of its workforce through the calendar year-end.”

"This is why we are tremendously grateful that the federal government has worked so hard to support the airline and airport workforce during these unprecedented times. These funds will protect our workforce so that we can continue providing passengers with an economic and cultural lifeline via the air transportation network. We again applaud and are thankful to the Senate, House and President Donald Trump for their bipartisan efforts in passing the CARES Act and we are grateful to the Department of Transportation, Federal Aviation Administration for the swift and thoughtful granting of these funds to airports in dire need of them. Huntsville International Airport will use monies granted to offset the tremendous revenue losses that we have incurred since the onset of this pandemic and to maintain the “ready status”needed to immediately get air service capacity ramped up as the economy recovers.”

Kuner said HSV has not laid anyone off because of the essential nature of their jobs and portions of the airport are still fully functioning.