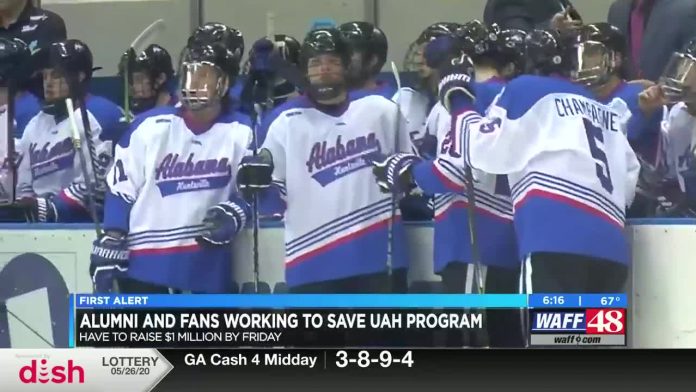 
HUNTSVILLE, Ala. (WAFF) - University of Alabama Huntsville former hockey players, alumni and fans will be going public to try and rally support for the hockey program.

Former players Tony Guzzo, Matt Parker, Jared Ross and Shane Stewart attended a Wednesday press conference at the VBC. This group is working to raise $1 million by the close of business Friday in order to save the team.

Due to the coronavirus pandemic, university leaders decided to cut the hockey program on Friday, along with men’s and women’s tennis.

Jared Ross is one of the alumni leading the charge to save the program. He spent four years on the ice playing for UAH, and then went on to the NHL. His dad, Doug Ross, coached the team for 25 years, leading the Chargers to two Division II National championships.

Ross is confident they can raise the $1 million needed to save the team and he knows they need all the help they can get.

UAH Charger hockey has a 41 year history and helped Huntsville become the “Hockey Capital of the South”. Ross said you can not just throw away those years of history and tradition.

“Hockey in Huntsville has been around since the late 70s and it’s really grown," Ross said. "You look at the kids around the rink and how it’s impacted them. You see them out on the ice skating during the intermission and cleaning up the snow. It’s had a huge impact on the growth of hockey in Huntsville.”

If they are able to raise the money to save the team, Ross said a committee would be put together of alumni, former players and community leaders to get the program back to greatness.

Ross is hoping people will band together to keep the team alive for future Chargers, he said any amount people can donate would be great.