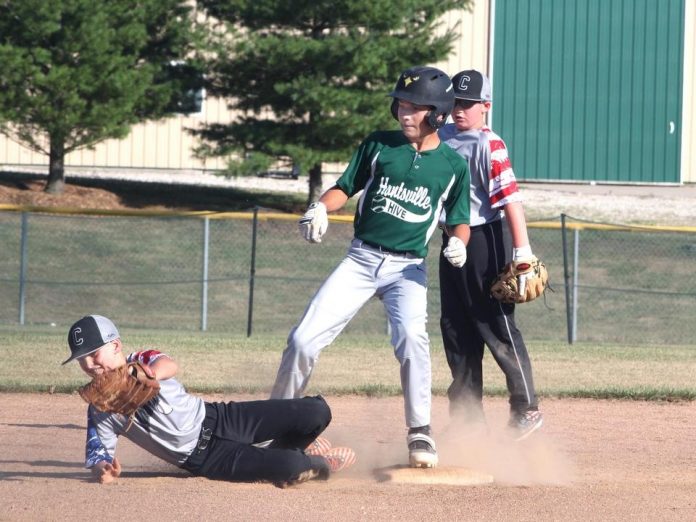 
In a battle among undefeated top two American Division baseball teams of the Moberly Midget League, the Huntsville Hive were powered by a pair of 2-run homers belted by T.C. Dale and Nathan Galland to build an 8-3 lead against Centralia Thunder-Kempker going into the bottom of the fifth.

However, within the next four outs the game the Hive lost its sting.

Mishap, after mishap, Centralia took advantage of fielding errors and walks that were issued.

The Thunder weathered the course, plating five runs in the bottom of sixth and rallied to defeat Huntsville Hive winning 9-8 with seven of those tallies unearned.

With this triumph, the 12U age Centralia Thunder (9-0) is in sole possession of first place and the Hive (8-1) second in the division standings as the 2020 MML’s shortened season draws toward a close.

Both clubs have one regular season game left to play by week’s end leading up to the playoffs being held July 20-21 at the Howard Hils Athletic Complex and secured a berth for the playoffs.

Trailing 8-4 heading into their final plate appearance, the Thunder accomplished its goal sending nine players to the batter’s box and manufactured five runs with the aid of just one base hit, and only one out was recorded during the process.

Elliott McCoy was hit by a pitch delivered by Huntsville reliever Dale to open the bottom of the sixth inning, and with one out Chase Kempker singled. Cole Anderson and Luke Waltemate reached base safely on errors bringing home McCoy and Kempker respectively. Daniel Stone, Cal Romine and Rex Bryson all were patient at the plate to draw walks, with both Romine and Bryson’s free passes to first base resulting in runs scored to tie the Hive.

Ian Arellano’s hard-hit grounder to the Huntsville third baseman was mishandled, allowing Stone to touch home plate for the go-ahead run and end the contest.

Brayden Gaughan pitched a scoreless sixth inning for Centralia and was handed the win. He gave up one hit and struck out one. Starting pitcher Anthony Ford labored five innings and yielded five hits and walks, recorded five strike outs and four of the eight runs he was charged were unearned.

Bryson, the Thunder’s leadoff batter, went 2-for-3 with a double. Ford had the team’s other base hit.

Dale was the tough-luck losing pitcher for Huntsville Hive and all five runs attached to his name were unearned. He threw one full inning of relief walking four and yielding two hits.

Cooper Harvey started on the mound and lasted 4 1/3 innings. Harvey fanned 10 batters, walked three, gave up two hits and half of the four runs charged to Harvey were unearned.

Dale’s 2-run blast over the centerfield fence highlighted Huntsville’s 4-run production in the first but Centralia responded by scoring three runs in the bottom half. Two frames later, Galland deposited the baseball over the right field fence for his 2-run dinger to push the lead to 8-3.

Harvey ripped a double for the Hive. Haynes Harold, Gage Kempker and Peyton Chapman each hit one single.