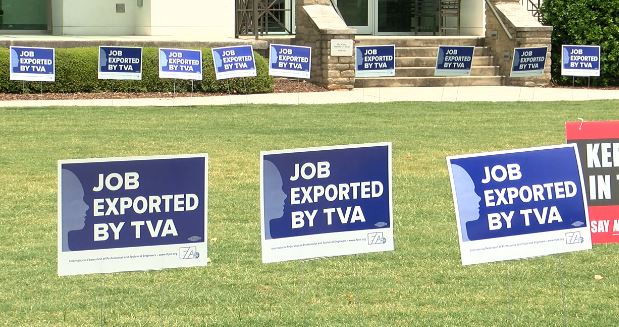 The TVA is contracting out part of its IT department to make long-term upgrades. But, the union thinks it’s just an excuse to hire foreign workers.

"We're not against foreign workers, we welcome them but what we don't welcome is for American companies to fire Americans to hire them," Stacy Whetzell, a protester, said

Whetzell has worked for the Tennessee Valley Authority for 45 years. He said his reasons for protesting against TVA were personal.

"I'm here for my co-workers that are still raising families. I'm here for my kids and my grandkids wondering will there be American jobs in the future for them if we are on the path to just outsource into foreign countries," he said.

But, TVA said that's not what's happening. TVA said there may be foreign workers hired, but those workers will already be legally able to work in the United States.

"All workers must be located in the United States, that may include a worker who's from another country and has a visa to work here," Malinda Hunter, TVA spokeswoman, said.

Hunter said the process started more than a year ago and that it’s been a team effort.

"Their union partners have been part of this discussion and although they may not agree with some of the changes that have been made we continue to make sure they have a seat at the table with these discussions," she said.

Alabama Senate candidate and former Attorney General Jeff Sessions showed up to say he supports the union’s protest. He said it’s another example of immigration problems.

"The workers here today, they're saying this is a danger to the tva, all of us and it highlights a flaw in our immigration system that was never intended. they never intended to hire H1B1 workers to fire Americans and place the foreign workers in there instead," Sessions said.

Hunter also said the only layoffs made so far have been in Tennessee. She said the electric company gave those employees a chance to transfer, and helped others find new jobs.