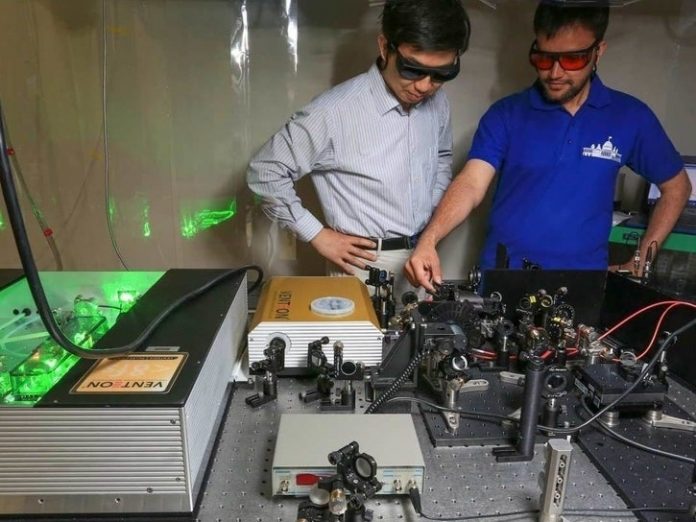 A University of Alabama in Huntsville researcher says, "As far as we know, this is the one and only such system in the world."

From the University of Alabama at Huntsville:

Researchers at The University of Alabama in Huntsville (UAH) have developed a unique spectrometer to study ultrafast properties of photonic materials and devices and have used it to discover a never before observed aspect of gallium arsenide (GaAs), one of the most important photonic materials.

"As far as we know, this is the one and only such system in the world," says Dr. Lingze Duan, a professor of physics and astronomy, who teamed with Hemang Jani in a five-year effort to develop and build the spectrometer and conduct the GaAs research. Then a doctoral candidate, Dr. Jani received his doctorate this semester.

"So, why do we care about these ultrafast properties? First, they are fundamentally interesting," says Dr. Duan. Physics under extremely short time scales is a new frontier in science that only became accessible after ultrafast lasers were invented about 35 years ago.

"Understanding how atoms, molecules and solid-state materials behave in short time scales offers deeper insight into the dynamic processes occurring in them," he says. "Moreover, studying these ultrafast properties may lead to new photonic devices, which could find applications in optical communications, optical sensing, optical metrology and so on."

How fast is ultrafast? The scientists' goal was to reach a time resolution of less than 10 femtosecond (fs), where 1 fs is one-millionth of a nanosecond.

Dr. Jani built the device from the ground up. The winner of the 2020 UAH College of Science Graduate Research Award, Dr. Jani was also a recipient of the 2018 SPIE Optics and Photonics Education Scholarship.

The research project was funded in part by two National Science Foundation grants, including Dr. Duan's NSF CAREER Award. A paper about the research has recently been published in the journal Physical Review Applied.

The simple and compact spectrometer, which the pair calls a few-cycle pump-probe reflectometer or few-cycle PPR, can deliver 8 fs pulses on the sample with a spectral coverage of 300 nanometers.

"Its uniqueness lies in the simultaneous on-sample delivery of short pulses and a broad spectrum, which lends us the ability to make high-resolution time-resolved measurements within a wide wavelength range," says Dr. Duan.

The team uses one of the fastest lasers in the country, capable of generating 6 fs pulses, which are often referred to as few-cycle pulses.

"To do ultrafast spectroscopy effectively, we need to make sure these few-cycle pulses can be preserved through the optical system of the spectrometer and be delivered onto the sample with minimum distortion," Dr. Duan says. "This seemingly straightforward task turns out to be quite challenging, because all optical media, including air, have a property called dispersion, which means lights of different wavelengths travel in them at different speeds."

Ultrafast pulses consist of a lot of different wavelengths.

"When an ultrafast pulse travels through an optical system, these wavelength components begin to walk off from each other, causing the pulse to be broadened," Dr. Duan says. "This problem becomes especially severe for few-cycle pulses due to their ultra-broad spectrum."

For example, a 6 fs pulse from Dr. Duan's laser would become 16 fs after merely traveling 2 meters through the air. That problem has prevented few-cycle pulses from being widely used in ultrafast spectroscopy, despite their higher temporal resolution.

Most researchers opt to use much longer pulses that are easier to handle. Dr. Duan says the new spectrometer shows that the problem can be directly addressed via innovative and cost-effective designs.

"What we have demonstrated in this research is that, with careful designs, it is feasible to build a spectrometer of this caliber without breaking the bank," he says.

The researchers used the spectrometer to study properties of GaAs, a common photonic material widely used in LEDs, semiconductor lasers and photosensors. As one of the most important photonic materials, GaAs has been thoroughly studied for over a half century.

"In a nutshell, we studied how electrons in GaAs behave after they are excited by an ultrafast optical pulse using our few-cycle PPR," says Dr. Duan.

"Obviously, everything happens within a very short time scale. Just like throwing a rock into a quiet pond, it's going to generate disturbance and ripples, but after a while the pond will quiet down again. In our case, the few-cycle 'pump' pulse is like the rock and the GaAs sample is like the pond."

The quiet-down time in GaAs takes only about 100 picoseconds. One picosecond is 10-12 seconds.

"The 'disturbance' we looked for was the slight change of optical reflectivity off the sample surface," he says. "This change of reflectivity is also wavelength dependent."

The time evolution of the wavelength dependence can inform researchers about how photoelectrons momentarily change the properties of GaAs. Band filling and band gap renormalization are two well-known effects caused by photoelectrons.

"What we discovered in this research is that these two processes have an interesting competition mechanism," Dr. Duan says. "Band filling is a quicker process. It establishes first. However, band gap renormalization is a stronger effect; once it establishes, it becomes the dominant effect."

Understanding these details of photoelectron behaviors in photonic materials can help scientists develop ultrafast photonic devices such as fast photodetectors, photonic switches and semiconductor photocathodes that can find applications in a wide range of fields.

This press release was produced by the University of Alabama at Huntsville. The views expressed here are the author's own.